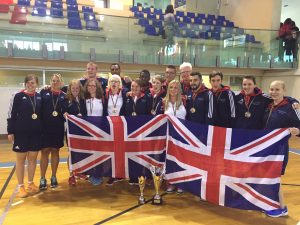 Birmingham has been selected as the host of the 2023 IBSA World Games, a multi-sport event for blind and partially sighted athletes.

The Games, due to take place from 18-27 August 2023, will be held at the University of Birmingham, across the Edgbaston area and wider region.

The IBSA World Games are the largest high-level international event for athletes with visual impairments, with more than 1000 competitors from more than 70 nations.

Staged every four years the World Games are the pinnacle of the international calendar outside of the Paralympic Games. With three Paralympic and eight non-Paralympic sports, for some athletes it is the highest level they can compete at.

Goalball is set to be one of the showpiece events at the IBSA World Games, as it is the only sport specifically designed for participants with a visual impairment and not a variation of an existing sport. The competition will also be an opportunity for the Great Britain squads to qualify for the Paralympics in Paris the following year.

There are over two million people in the UK living with sight loss, with over 28,000 people from the VI community resident in Birmingham.

Mark Winder, Chief Executive Officer, Goalball UK, said: “We are thrilled that one of the biggest events in the world for athletes who are blind and partially sighted is coming to our country. It will be a real celebration of VI sports and the incredible athletes.

“The IBSA World Games in 2023 will present an amazing opportunity for our Great Britain squads to compete against world class teams on home soil, with a chance to qualify for the Paralympics in Paris. There will be a real excitement among everyone involved with goalball counting down to the Games, right from the grassroots to the high-performance level.

“Having such a prestigious competition in the UK is another fantastic chance to put the spotlight on our sport. It will hopefully inspire even more people who are blind and partially sighted of all ages to give goalball a go and be part of our wonderful community. We also hope it will encourage more people to join our workforce and support our wonderful sport.”

Alaina MacGregor, Chief Executive Officer, British Blind Sport commented “As the IBSA affiliated organisation representing Great Britain, we are delighted to have been selected to host the 2023 IBSA World Games. This is really an immense opportunity for us and all stakeholders to showcase an amazing sporting event for visually impaired people from across the globe. Our choice of Birmingham as the host city put us in great position, showcasing to the host selection committee a city that is vibrant, inclusive and welcoming.

The whole team at British Blind Sport are delighted with the outcome and cannot wait to raise the profile of sport for people living with sight loss, as well as the aspirations of the participating athletes.

A huge thank you to all those who supported us to submit such an impressive bid, particularly the teams at MLS Contracts, the University of Birmingham and UK Sport.”

Jannie Hammershoi, IBSA President, said: “We are confident that Birmingham 2023 will contribute towards our goal of being the world’s leading body for sports for athletes with visual impairments. That is why in three years’ time we hope to raise the bar for the IBSA World Games. We want athletes to have the best platform for their skills, as well as ensuring as many people as possible can experience the sports for themselves. We are excited to work with the team at British Blind Sport in reaching our common goals and making 2023 a really memorable year.”