The Goalball UK National League has 3 levels of play that contribute to an overall league. Each level and region has its own league that feeds into the national league through a points scoring system.

For more information about the committee, fixtures and leagues please read below.

Following Goalball UK’s ‘Grow OUR Game’ conference earlier in the year, a common theme was having more dialogue with the officials. We are excited to announce a new monthly feature of the Goalball Times where a question is asked by the goalball community, with an answer from a Goalball UK official. This month’s question has been answered by Dina Murdie.

If you have a question you would like answering, please email tom.dobson@goalballuk.com, and you may be featured in a future edition! 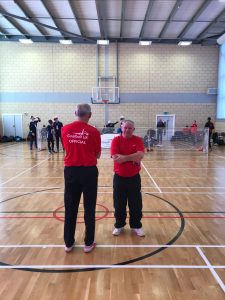 “When chasing (and successfully retrieving) a loose ball over the high ball line (and before the centre line) when is it a ‘high ball’ and when is it ‘out’?”

Take this from the moment the player has the ball under control in the neutral area. There are several actions that player can then do:

A)  They can pass it back to a player in their own team without being called for a high ball, even if it touches the ground in the neutral area.

B)  They can throw it out sideways – a ploy often used if the player is conscious that the 10 seconds is close – but it counts as a throw. Therefore, if it touches the neutral area it will be a ‘high ball’ but if it is thrown out and does not touch the neutral area it will be ‘out’.  However, in this instance the players should be aware that if they throw the ball out in a manner which is a considered dangerous by the referee (in that it could cause an injury to any person or thing in the vicinity), even if there is no-one there, they will be given a personal unsportsmanlike conduct penalty.

C)  If the player loses track of where they are and throws the ball towards the other team and it touches the neutral area, then it is a high ball.

Where a player or coach wishes to challenge a ruling given relating to the domestic rules he/she should write to the Chairman of the CC at TheCC@goalballuk.com who will raise the matter with committee who will make a decision.

If you have any comments or matters you would like raising at the next meeting please send them to TheCC@goalballuk.com