Digging through the Archives – This Girl Can 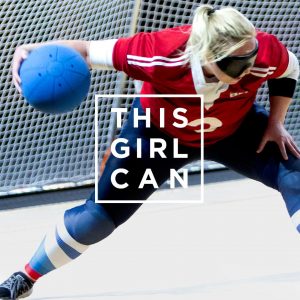 This week we are putting the spotlight on our ‘This Girl Can’ events.

Sport England have historically had lots of great campaigns to help people get active. Currently ongoing is the ‘Join the Movement’ campaign which is helping people find ways to safely get and stay active, both indoors and outdoors, in respect of the coronavirus restrictions. Follow this link to find out more!

Back in 2015, Sport England launched a high profile campaign called ‘This Girl Can’. The purpose of this was – and still is – to specifically celebrate active females and, in doing so, inspire other women and girls, regardless of shape, size and ability, to get moving.

Goalball UK got involved in the campaign by promoting and delivering a series of club based ‘This Girl Can’ sessions in October, November and December 2015. They were all open to females of any age, both visually impaired and sighted, and no previous experience of goalball (or any other sport) was required.

Hosted by Nottinghamshire Sheriffs, Winchester, West Yorkshire and RNC Hereford, all of the events were a great success. Gemma Bell for example had never played goalball before but attended the West Yorkshire session and immediately fell in love with the sport – she has been a prominent member of the club ever since. An account of the event at RNC Hereford can be read by following this link:

Following these initial club based events, there was then the opportunity to attend a ‘Competition Day’ at The Lighthouse in Birmingham in April 2016. This brought together females from 7 different clubs around the country which was a great event to be a part of!

Further Goalball UK ‘This Girl Can’ events were then held in Birmingham in December 2017 and London in January 2018. There were also events planned for both Birmingham and York in May 2020 but sadly these had to be postponed – new dates for 2021 will hopefully be announced soon.