Digging through the Goalball UK archives – End of Season Tournament 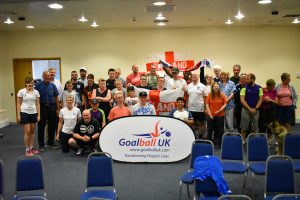 As the Goalball UK End of Season Tournament was due to take place this weekend, we have decided to look back a few standout moments from recent years.

What have Spiderman, Jonnie Peacock, the Copper Box and String & Tape all got in common?

The answer is they have all been team names at a Goalball UK End of Season tournament!

This tournament is unique in the goalball calendar in that all players enter as individuals and are then put into mixed teams by Goalball UK. Although competitive, the emphasis is always on fun and provides an opportunity for players from different clubs around the UK to come together, and get to know each other a little bit better both on and off the court, whilst celebrating a successful season.

The decision of what to call all the teams provides much entertainment in the Goalball UK office. Often the theme is topical – so, during last summer’s heat wave we had different ice creams selected! And in 2018 during the World Cup in Russia Jordan Pickford, Harry Kane and Raheem Sterling, who all represent the England men’s national football team, were among some of the team names.

Somewhat controversially in 2017, referee’s surnames were used. Although, being the fantastic bunch that they are, they all remained impartial when officiating the team with their name!

Following the tournament, all the awards are then presented to all the league winners from the season plus the top goal scorers, as well as the prestigious Player of the Season and the Keith Lound Memorial (Service to the Sport) award.

Everyone then has a chance to socialise, whilst having something to eat and drink. Since 2015, this has taken place at the home of Goalball UK, the EIS in Sheffield, as it is one of only a few suitable venues big enough to be able to accommodate all the Goalball Family.

The 2019/20 End of Season tournament was scheduled to take place this Saturday (4th July) but unfortunately has been cancelled due to the ongoing COVID-19 situation. However, there will still be a review of the season and the award winners will be announced on our social media channels. So be sure to tune in on Facebook, Twitter and Instagram.