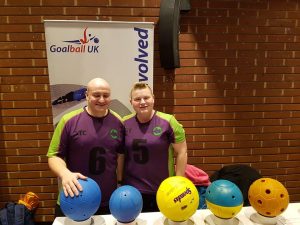 This week we caught up with Sally Britton of Croysutt Warriors!

I first discovered goalball through my husband Tommy. When he started playing, I was the guide and taxi service, but one day I got the urge to play! So, I gave it a go but got hit quite hard by Jack Peters. I cried but it did not stop me, I had got the bug but also being able to play alongside my husband and doing something together was great. Our daughter (Tiffany-Jade) then started to play along with my son (Declan), so it then became a family thing. Below is a picture of myself stood next to Tiffany-Jade (number 9) with the rest of the Novice team at a tournament. 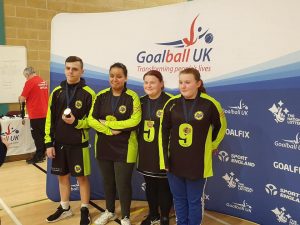 It is a song called ‘Yeah You’ by the Manor. It is from South London and how we roll within the community. If I am with the team then I tend to listen to 90’s songs; What is love, push it; to name a few. I also listen to a lot of Adele and Ed Sheeran.

I do not have any superstitions or rituals, but before every tournament I get the feeling of being sick which is probably just the nerves of playing. Once I have played my first game at a tournament it then turns into drive and determination, that overcomes me and Tommy and the rest of the team motivating each other! 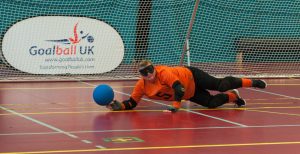 I absolutely love steak and more often than not, its steak and chips. If not, then chicken in pitta from Nando’s.

Well to be honest I admire all the goalball players, being sighted I only get a glimpse of what they have to do on a day to day basis, but if I have to pick one then it is going to have to be my husband Tommy Britton. I have seen how much he has achieved since playing the goalball and how much it helped with his mental illness which changed his entire life to become a fitter person. Since playing goalball he has lost nearly 6 stone and is in the gym 7 days a week! Outside of goalball Tommy is a psychologist and the drive he has to go further into psychology has led to him to start university in February. I also admire how he has overcome some of the challenges that came with his sight loss.

To be honest outside of goalball, I do not play any other sports as I am a mum of five and they keep me busy. I enjoy colouring as it is really peaceful and therapeutic. I am also a trained hairdresser, so I love getting stuck into that.

The Maldives. It just looks so lovely and peaceful; I would love to have a hut in the sea as they look amazing but not forgetting about the spa menu!! This would just be my holiday (no children) but of course I would take Tommy.