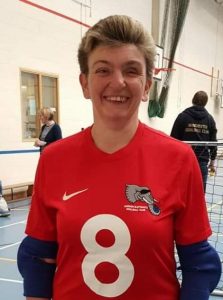 What club do you play for or coach?
I was a founder member of Croydon Goalball Club (who became Croysutt Warriors) but I now play at Intermediate level for London Elephants.

How did you discover goalball?
I heard a bit about goalball during the London 2012 Paralympics but, back then, there were no opportunities to play locally. When sessions started in Croydon in 2015, Russ Sparkes invited me along. I couldn’t go to the 1st session but went along to the next and really enjoyed it. Before long I was training and playing in tournaments on a regular basis. Being totally blind, goalball has given me confidence and helped me develop my orientation and hand to ear coordination which has transferred to daily living skills.

Is there a particular song, artist or genre that you listen to before a tournament to get in the mood? Or anything you’re loving at the moment?
I can be quite loud at tournaments. Alex Bunney often tells me to curb it! “Oggy Oggy Oggy, Oi Oi Oi!” I’m a big fan of Queen and I remember once just clapping my hands to warm up but Richard Wheatley joined in stamping his feet and it became a rendition of ‘We will rock you’! At home, I’ve always got the radio on – usually Magic or Heart. I really like ‘Just you and I’ by Tom Walker as it makes me think about Urwin (my now retired guide dog).

Do you have any pre-game superstitions or rituals?
I usually pack my bag the night before and then check it and check it again to make sure I’ve not forgotten anything! I also always put my shirt on before I leave home. Once, we were staying in a hotel, and I thought my bag had been put in the boot of the car, but it hadn’t and I didn’t realise until I was at the venue, so now I always take responsibility for it.

Do you have a favourite post-match meal?
Pasta. Preferably lasagne with some garlic bread.

Which goalball player do you admire the most and why?
Dan Roper who plays for Fen Tigers and GB. On court he is a really dynamic player and off court he is always happy to offer help. I remember listening to the Euros and the commentator kept calling him ‘Dancing Dan Roper’!

Outside of goalball, what other hobbies/sports do you do?
Ice skating. This is me in action – https://youtu.be/MifxCcDz98A. I used to be part of the GB team and took part in some amazing competitions. I skated at the last Tattoo in Berlin in 1992 in front of the Queen! We stayed for 2 weeks in barracks in Germany whilst we taught the British Army! The performance was based on the elements and I was wind! Here are the highlights – https://www.youtube.com/watch?v=eapzfotHZeM. I also enjoy tandem cycling, with Russ Sparkes, which got me back in to sport after having a family. More recently I have started playing VI (sound ball) tennis. I also go to the gym to keep fit and do Pilates and yoga.

Finally, what place, anywhere in the world, is on your bucket list to visit and why?
I’ve been to the USA a few times with ice skating, including Minneapolis and Atlanta, but would really like to go to skate in Central Park in New York and the Broadmoor Arena in Colorado Springs. I played goalball for England in the inaugural Home Nations tournament (in York) and would love to play for them again – maybe in a Veteran’s tournament somewhere in the world? I would also really like to play for London Elephants in a European tournament such as Malmö.