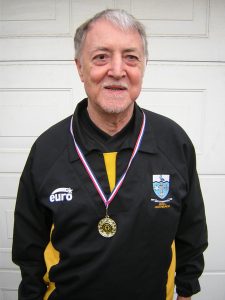 This year Goalball UK is celebrating its 10-year anniversary as a national governing body. To mark the occasion, the NGB is putting the spotlight on 10 of the most important people that have been involved with the sport, shaping its journey and transforming people’s lives.

The second in the series is Colin Baxter, who was introduced to goalball in his sixties and then played an integral role establishing Goalball UK, becoming the organisation’s first chairman in 2010.

Colin has been passionate about all sport from a young age, especially playing football at his primary school. However, as a result of detaching both retinas, the opportunities to play anything rough or competitive were limited by the need to preserve his residual vision.

“It wasn’t until I retired in 2004 that I sought new opportunities to keep active and joined a local sports group for visually impaired people.  The first time I picked up a goalball at the age of 63 I was instantly hooked. I could play a ball game without the stress of struggling to see the ball and it felt like proper sport. Whenever I took part in a match, I found myself getting the same buzz as I did when I lined up for my school football team at the age of nine.”

As Colin’s legal specialism is the law relating to associations, this expertise helped him to form the Hull Outreach Club. Three months later the team were winning competitions and collecting their first goalball medals.

“One of the things I loved about goalball was all the debate about tactics and the best way to play. On goalkeeping principles, I favoured having everyone as far forward as possible and I initially played standing up. You could pull off some fine saves, but, at the higher levels, it was often difficult to get down fast enough, resulting in the classic schoolboy error, the spectacular dive over the top of the ball passing half a yard from your foot!”

Colin gradually got more and more involved with managing sports groups and joined British Blind Sport’s Goalball Committee, eventually becoming its chairman at what proved to be a critical moment.

Sport England had made further funding conditional on British Blind Sport commissioning an independent report into the management of goalball.  This work was undertaken by the late Roger Clifton, a former Great Britain goalball player running a sports development company. After a major consultation process, Roger recommended that goalball should become independent from British Blind Sport.

“This was, in essence, the start of Goalball UK.  As the chairman of the British Blind Sport Goalball Committee, I found myself heavily involved in organising the separation and using my legal skills to assist with drafting Goalball UK’s initial constitution and application to the Charity Commission.

“In order to manage the transition, it made sense for me to become Goalball UK’s first chairman. I was in the position for about six months, but it was soon clear that the role demanded more aptitude than I had for networking and forging relationships with key stakeholders. I was strongly in favour of Mike Reilly’s appointment.  He had an abundance of these skills and was plainly the right man for that time.”

Since passing over the reins of Goalball UK, Colin has become the chairman of Blind Cricket England & Wales and continues as chairman of Yorkshire VI Cricket Club, for which he’s still an active player. After helping to get the Scarborough goalball club going, he finally retired at the age of 72, but remains an avid reader of Goalball Times.

“It’s great to see so many young visually impaired people giving the sport a go. As in blind cricket, it’s often astonishing to see the massive lift it gives to their confidence and self-esteem. Unfortunately, there are far too many visually impaired individuals who don’t find educational or employment opportunities to match their intelligence and energies.  Playing team sports like goalball can provide a new sense of purpose.

“I would love to see Great Britain teams competing at the Paralympics. Having the sport thrust into the limelight as it was in 2012 would provide a welcome boost to the growth of the game.

“My one piece of advice for any male thinking about giving goalball a go is not to forget to wear a box! To use a rather off-key metaphor, I’ve got the t-shirt!”