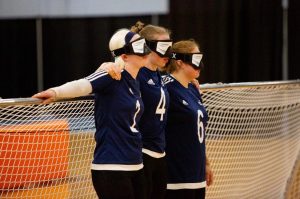 This month we caught up with Kali Holder, one of the stars of the women’s Great Britain squad. She gives an insight into becoming an international player, her passion for goalball, and how she wants to give back to the sport.

“Playing for Winchester was such a fantastic introduction to goalball. The club was set up perfectly for new players of all abilities and everyone was so welcoming.

“With the club being quite a distance away from my home, as well as learning the sport, I also learnt a number of other life skills, such as getting the train alone which was initially very daunting, especially being partially sighted, but taking the initiative at a young age definitely helped me to become much more independent.”

Kali played her first season for Winchester at novice level and her natural talent for the sport was quickly spotted. She was invited into the talent pathway, the programme to develop younger players for the Great Britain squads. Shortly after this she was on the plane to her first international youth tournament in Finland.

“Each member of the team was still pretty new to the sport, but this didn’t impact on the overall experience was fantastic. At this tournament I made lifelong friends and met people that I am still playing goalball with to this day.

“Being at an international tournament and seeing what other countries were doing, as well as how talented they all were, was a big moment for me. I was in awe, learning new skills and rules simply by watching games. This allowed me to see what can be achieved, but also gave me the desire to improve myself as a player.

“As well as the sporting side, this tournament was a learning curve in many other ways. Even though we were the youth team, we were still representing Great Britain and the expectations were on us to behave like the senior team.” 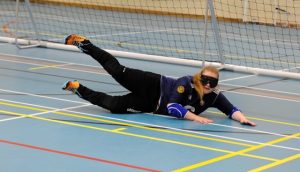 Back in the UK, Kali continued to rise the ranks in the Goalball UK National League. She went on to play for the Royal National College for the Blind (RNC) when she started studying there.

“The National League competitions are so great for younger players. They are really inclusive and you get to chat with and learn from the more experienced athletes. At every tournament I was encouraged by the coaches to make an effort to ask questions and watch as many games as possible, it really helped my development.

“I always loved watching and learning from Laura Perry, she is definitely the goalballer that I look up to the most. She always scored loads of goals and that attacking style of play was something that I wanted to emulate and base my game on.”

In 2016, Kali got called up for the first time to the Great Britain senior squad at the European B Championships in Portugal. Despite being on the fringes of the squad, the team put on a remarkable display, winning gold and securing promotion to the top league.

“Having that experience to be in and around the senior squad at that time was such an important part of my goalball career. It was hard watching from the bench, especially at nail biting times, but it’s important to remember that it is a team game and the guys on the court were incredible.” 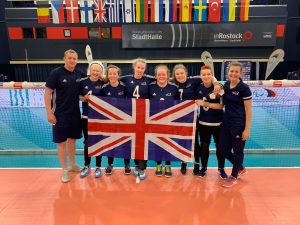 From this point, Kali’s standing in the game continued to grow and now she is firmly established in the senior Great Britain team. She has gone on to travel to more than 10 different countries to play goalball and has become the focal point in Great Britain’s attacking play. At international competitions, she can often be found at the top end of the goal scoring charts.

“There have been a few ups and downs being part of the Great Britain goalball squad over the last few years, but I think right now we are in a good place. We have a stable squad of fantastic players and Aaron Ford, the head coach, has improved us all so much.

“There are many younger players with an abundance of potential coming through the talent pathway and with continued commitment they have the potential to be part of the GB team. This competition for places really drives us on to perform to the very best of our abilities and not get complacent.

“Obviously, the overall ambition for us all is to make it to the Paralympics and we were so close last year to realising that dream. There is still a chance that we could make it to Tokyo, but that is out of our hands for the time being. We are focused on being in the best shape possible if we get the opportunity.

“As many of us playing for Great Britain or coming through the development programme are studying at RNC, we have much more access to great facilities that we normally wouldn’t have. From time on the court to working out in the gym and access to coaches – the resources at our disposal here have definitely enabled us to improve and compete with the best in the world.” 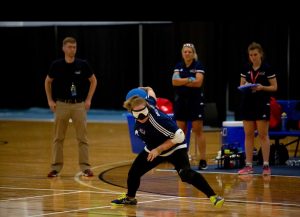 “Despite still being young myself, I really love working with children and younger players coming into the sport. I hope that by sharing my passion some of the people I work with will have the same amazing experience with goalball that I am currently having – whether that’s at the elite level or just making friends and gaining confidence.

“My main piece of advice for any youngsters getting started with the sport is perseverance. Goalball is a lot harder than it initially looks, but if you keep going it is so rewarding and so much fun.