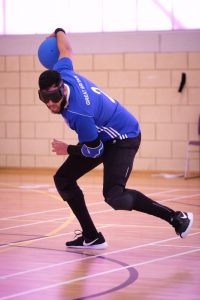 This month we caught up with Naqib Ahmed, one of the rising stars of the men’s Great Britain squad and a budding coach.

“Starting at New College was the best thing I could have done at that time. I had almost given up on playing sport, but with the great facilities and staff, it really encouraged me to start playing again.

Naqib started off in the Goalball UK Novice National League with New College’s team in September 2015, but was quickly promoted to the intermediate level. His natural talent for the game was spotted by Faye Dale, who is the head coach for the Great Britain men’s squad and involved with the Talent Pathway scheme for aspiring athletes.

“I was pretty shy at first when I started competing at Goalball UK competitions. But the fantastic community of people playing the sport made it so easy to integrate and become a member of the family. It doesn’t matter where you come from or what your background is, everyone is in a similar position and we are all equal. There is a real sense of comradery, we all share tips about how to improve and each player has the backing of the community to do their best.

“My progression at the beginning was quite quick. Although, making that leap from novice to intermediate was big and it took some getting used to. It was one of the first shots I faced that really brought that home for me. It smashed me in the chest and then I properly realised what I was up against!

“Faye gave me the confidence to believe that I was good enough to be at this level if I continued to put in the hard work. It soon started to pay off as my passion for goalball continued to grow. I didn’t score loads at first, and come to think of it, conceded quite a few! Nevertheless, I believe it was an important part of my journey to where I am today.”

In a little over a year and after finding the net 23 times at intermediate level, Naqib was invited to take part at a Great Britain Talent Camp where he got the opportunity to compete against and train with some of the best players in the country. The talent camps are an opportunity for Goalball UK to evaluate the emerging talent coming through and decide if they’re ready for international competition in the youth squads. 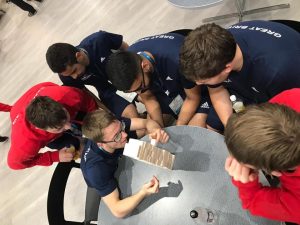 “At this stage I knew I was developing into a pretty decent player, but I didn’t imagine I was anywhere near good enough for the Great Britain squads. I was still young and was not happy with my weight, so the call up to the Talent Camp came as a bit of a surprise. However, I embraced the opportunity and gave it my best shot. I remember thinking at the end just how strong and technically gifted these guys were in the Great Britain squad.”

Naqib’s first opportunity to represent Great Britain came at a youth competition in Denmark in May 2017. He went on to establish himself as one of the brightest prospects in the development squad. Naqib was the third highest scorer at a competition in Malmö and then played an integral part as the team claimed the bronze medal at a tournament in Lithuania. In 2019, Naqib was selected for the team to compete in the European Youth Games in Finland.

“This was the first major competition that I represented Great Britain in. It was a weeklong event and it really felt like I was a proper Great Britain player at this tournament, as the quality of teams we were up against was much stronger than we had faced before. We slightly tweaked the tactics and I was moved to the centre. It certainly paid off as I personally felt like I played some of my best goalball and we went on to claim another bronze medal!”

Naqib’s impressive performances did not go unnoticed and he has since be called up to the senior men’s Great Britain team. His rising stature in the game has giving him a new drive to maintain the best possible physical condition he can. 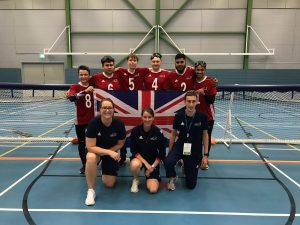 “Since joining the senior Great Britain squad, I have managed to lose over two stone. Goalball at this level is physically demanding, it is so important that I ensure I am in the best shape possible at all times to keep progressing. This is something that I didn’t take so seriously before, but having goalball and a new impetus has certainly made me even more determined to keep up with this side of being an athlete.”

Naqib attributes his progression on the court to the coaching work he has also been doing. Since he has become a coach at his hometown club in Birmingham, the team performed well at intermediate and novice levels, earning medals in various tournaments, and is on its way to establishing an elite team.

“Again, Faye was really important in the decision I took to start coaching. She encouraged me to try it and I definitely think it has given me a better understanding of tactics and the rules. Being on the side lines with a visual impairment gives you a different appreciation of the game. Having the opportunity to deliver instructions and work with the younger players will definitely hold me in good stead when I next get the Great Britain jersey on and line up on court.”