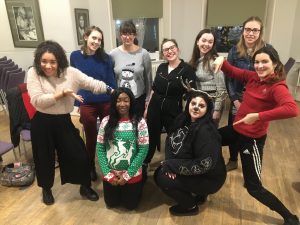 This month at Goalball UK, we are celebrating Black History Month by catching up with goalballers to speak about their black sporting idols – from trailblazers on the pitch, to those that use their platform to fight for equality. Today Ada Eravama tells us why elite level players in the goalball family inspire her…

I was first introduced to goalball at the age of 17, I was in my second year of college at New College Worcester and I found myself wanting to take up a hobby – my teacher suggested goalball as they thought it was something that I may like as Faye Dale was due to host a taster session which I was really happy to be a part of. She returned multiple times and it really drew me in and got me interested in starting to play.

From then I played goalball for the duration of my time at college, but then took a break when transitioning to university. I joined Merseyside Sharks and have been playing here ever since! 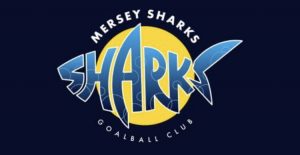 What do you enjoy about playing goalball?

I love the general feel of the sport, everyone has always been so welcoming. All anyone wants to do is make new friends and enjoy their time playing and competing which is something I am a big fan of.

Going to competitions is great, the games can be competitive but once you are off the court there is a real sense of community that I have never experienced with another sport so it is nice to have that mix. 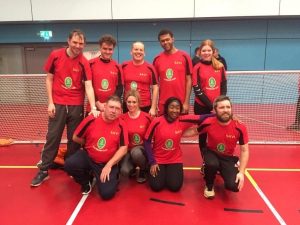 Is there anyone who inspires you the most?

I wouldn’t say that I have a particular sporting idol to be honest, I have, however taken inspiration from my fellow goalballers. When I first saw some of the elite players compete I was blown away at how skilled someone can be whilst having no vision at all! I was fairly unaware of most VI sports other than running and blind football so to witness another sport but also see such a high level of competition was captivating. Seeing these athletes training for international competitions, knowing that goalball is allowing them to travel was really cool!

The elite members of the goalball community are definitely people I look up to, I have always felt so welcomed and its so cool to think that I very well may have played with or against an international athlete! Having the various tiers in goalball in the UK (novice, intermediate and elite) is something I really like and provides an opportunity to experience and even play against some of these elite athletes!