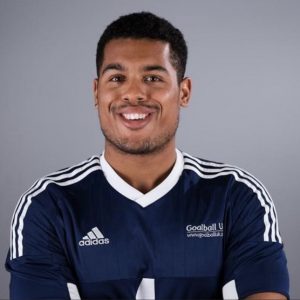 This month at Goalball UK, we are celebrating Black History Month by catching up with goalballers to speak about their black sporting idols – from trailblazers on the pitch, to those that use their platform to fight for equality. Today Devante Claridge tells us why both Lewis Hamilton and Raheem Sterling inspire him…

I was originally a farmer who had never come across goalball. However, over time my eye condition began to deteriorate so I decided to attend the Royal National College for the Blind at the start of 2019. I wanted to be able to develop myself for the future and this was the best route to do so.

When I got there, I started trying different sports to find a hobby although nothing stuck. I had football training which was cancelled due to bad weather, so my friend suggested I instead went to the goalball session which was on at the same time.

I was still in my football gear, but the coach got me padded up and I was ready to go. The ball was pretty heavy and it was being thrown at high speeds, it was an adrenaline rush I had only experienced when doing things like deep-sea diving or sky diving – I was hooked! 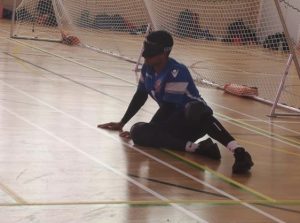 I was invited to compete at an intermediate tournament with the Birmingham Barbarians, there I played so well that they asked me to join their team permanently. This was amazing because I felt welcomed and accepted. They are great players so to get that recognition was great. I stayed with Birmingham for a while until recently joining Winchester Goalball Club.

Although it has been difficult starting at a new club during the current times, I really enjoyed getting back onto the court a couple of weeks ago and meeting my new teammates.

Growing up I loved football and Thierry Henry was someone who I looked up to, the way he carried himself both on and off the pitch was inspirational. More recently though my main idols are Raheem Sterling and Lewis Hamilton.

What is it about Raheem Sterling and Lewis Hamilton that makes them the ultimate inspiration to you?

Raheem Sterling embraces who he is, you can see the confidence he has in himself. He will stand for what he thinks is right and, in my opinion, is one of the main athletes making strides in achieving equality. This is similar to Lewis Hamilton. He is using his platform to contribute to real change, for example, him changing the colour of his car to black in a stand against racism and discrimination. This is something I really admire. 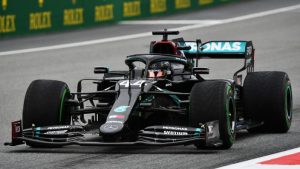 They both have a really positive outlook and keep a cool head, whilst also competing at the highest level, which is what inspires me most about them.

Has Raheem Sterling and Lewis Hamilton’s success motivated you to excel on the goalball court?

I have always been a fairly motivated individual, I want to succeed in whatever I do and that’s no different in goalball. One day I would love to represent Great Britain in goalball.  Raheem Sterling’s and Lewis Hamilton’s success’ definitely motivates me, the fact that they both never give up and have gone on to become incredibly successful irrespective of where they came from just goes to show that regardless of your start, you can achieve your goals. They never take no for an answer and that’s why they are at the top of their field. 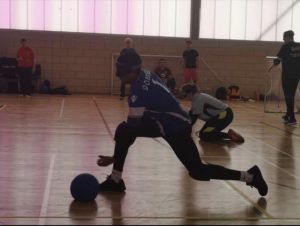 I notice this especially with Sterling, there have been times when he hasn’t played well and would receive criticism in the media but he wouldn’t let it affect him. He would go out the next game and play great. That sort of resilience is what inspires me most. 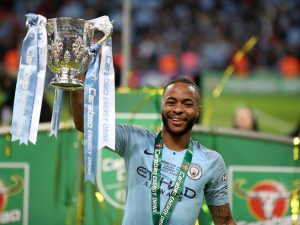 I am a little bit older than some of the other goalball players but seeing other athletes make it when the odds are stacked against them is something that keeps me motivated. My age isn’t going to stop me and I am going to keep working towards my goals.