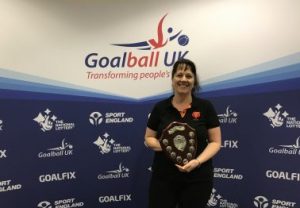 It is the time of year again, where nominations are now open for the Goalball UK End of Season awards. Despite the season being cut short, there has been a significant amount of play and many great contributions both on and off court during the 2019-2020 season.

Please remember that these are your awards, as there have been some great achievements this season. Nominations will be shortlisted and voted on by the Club and Competitions Committee.

The deadline for nominations is Friday 12th June at 5pm.

The two awards that require nominations are;

This award will go to someone who goes above and beyond the call of duty to assist in the development, facilitation and improved participation of the sport of goalball. They might have taken more responsibility, gone extra miles, been particularly helpful and all this, very often in a quiet and unassuming way. The award can go to anyone involved in Goalball; players, coaches, officials, and volunteers.

When Keith was involved with Goalball he became very aware of what volunteers did for the sport and how the sport would not function without volunteers.  So it is particularly apt that we recognise the contribution that people like him make to the sport every year. For those who do not know about Keith: he came into Goalball as a father of a player, in time he became our Chairman, he became a top referee and officiated at the Beijing Paralympics. He led the application and organisation for the Worlds in 2010.   He certainly took on more than he could have foreseen when he first came into the sport that day when he first brought his son along!

Player of the Season Award

The player of the season might be the top player in the league but they may also be someone very different. It could be a player that has made significant improvement across the season, someone who makes newcomers feel welcome at training or tournaments, helps set the standard on and off court with their behaviour and a player likely every coach would have in their team.

If you know someone who should be nominated, please use the form below;