I started attending the Huddersfield Actionnaires Club (which was for blind and partially sighted children) when I was at primary school and goalball was one of the many sports that we played. At secondary school, Moor End coach Stuart Adams helped me with my mobility training and invited me along to join in with his goalball sessions. I really enjoyed them and subsequently made by competitive debut at novice level at the start of the 2011/12 season.

By the end of the following season, I had progressed to intermediate level and had also been selected for the GB squad! My first international tournament was in Poland (in June 2013). This was followed by tournaments in Sweden (August 2013) and Hungary (October 2013) in preparation for the European Championships in Turkey (November 2013).

I made my debut at elite level during the 2013/14 season but unfortunately a succession of injuries and eye operations then prevented me from playing for a while. However, I’ve been back playing regularly for the past few seasons now for West Yorkshire and have aspirations of getting back into the GB squad. I really love goalball as playing with people with similar conditions has helped me accept my disability. 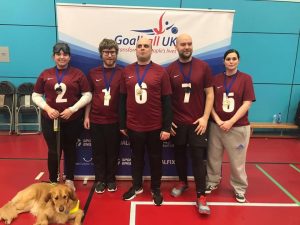 I used to ride a solo bike, following closely behind my dad, but as my sight deteriorated that was no longer possible to (safely) do. I therefore got my first tandem in 2013, primarily to help with my fitness training for goalball, and joined Tandem Trekkers. 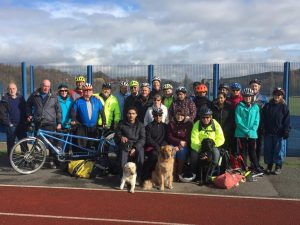 At the end of 2014, on the way home from a goalball tournament in Birmingham, I asked Kathryn Fielding if she would like to go out for a ride sometime. The idea of ‘a ride’ quickly developed in to a 170 mile Coast to Coast challenge! So, in August 2015 (after lots of planning) 15 tandems supported by 3 vehicles and 2 solo cyclists set off from Morecambe in Lancashire to Bridlington in East Yorkshire! You can read more about it in this Digging Through the Goalball UK Archives article.

I really enjoyed the ride so the following year decided to do something similar – this time from London to Paris! By now, I was the Chair of Tandem Trekkers so decided to do it to raise money for them.

At the moment I am busy trying to get everything in place so that we can restart our weekly Saturday morning sessions. We offer a varied programme which ranges from confidence building sessions on an athletics track (i.e. a flat, traffic free environment) to 30+ mile day rides around the Yorkshire and Lancashire countryside. We also have an annual residential. In addition, about three times per year we go to the velodrome in Manchester for a coached session. These are fun but really hard work as we don’t get to stop for a coffee, cake and a chat!