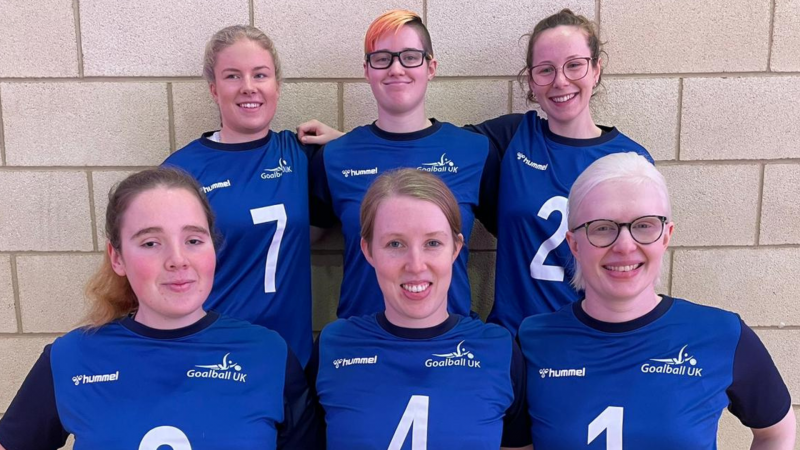 The championships, which are one of three qualifiers for the Paris 2024 Paralympics, will see the women face tough competition from across the globe.

Georgie Bullen, GB goalball athlete and Paralympian, 28, from Hertfordshire has been training hard all year for the Championships. “It has been twelve years since GB Women last qualified for the World Championships. Making it into the tournament and having the chance to play the best teams in the world is a huge achievement.” said Georgie.

Georgie was just sixteen years old when she last competed at the Worlds.

“This time around it does feel quite different for me. When we last competed in a World Championships in 2010, I had only been on the team for about a year and was still very much a ‘newbie’ at 16. This time round, I am in a vastly different position. I have different hopes for myself, and my preparations have been significantly more focussed.” added Georgie.

Cambridge based GB athlete Dr Sarah Leiter, 32, added “I am super excited about the upcoming World Championships! This will be my first time competing at a World Championship and we have been working hard as a team since our qualification.”

GB goalball athletes are not professionally paid athletes. They all work and study alongside competing and training for their sport.

“The biggest challenge is always balancing my work as a paediatrician with my goalball training and competitions. I am lucky to have supportive employers, managers and colleagues who make it possible,” said Sarah.

Gary Fraser, High Performance Lead for Goalball UK said “We are delighted to have qualified for the World Championships. The squad have worked incredibly hard and will be up against the best in the World in Portugal. We are ready to compete against some strong teams are bound to learn a lot from the Championships. We are prepared for the competition, which is the first of three qualifying opportunities for the Paris 2024 Paralympic Games” ”

A total of 16 women’s teams will compete for the coveted top two spots that give automatic qualification into the Paris 2024 Paralympics. Competition for the GB squad begins on Thursday 8th December with seven consecutive days of round-robin competition against each of the seven teams in their group. The quarterfinals and semi-finals will be played on Thursday 15th December with medal matches to follow on Friday 16th.

Goalball is a unique team sport played on a tactile court with three-a-side. The aim of the game is to score goals into the net against the opposing team. However, all players wear blackout eyeshades so rely on their other senses to succeed such as by touch and sound. The goalball itself weighs over 1kg and has two bells inside so players can hear it.

Solid teamwork is vital in goalball. Five of the GB Women players also compete in the Goalball UK Super League as the ‘Queen Bees’ to boost their playing time together in mixed competition.

IBSA (International Blind Sport Association) has released the schedule for the tournament and all matches will be live streamed on the IBSA YouTube channel so fans can watch at home.

Goalball UK will also provide commentary and information on Twitter throughout the competition.