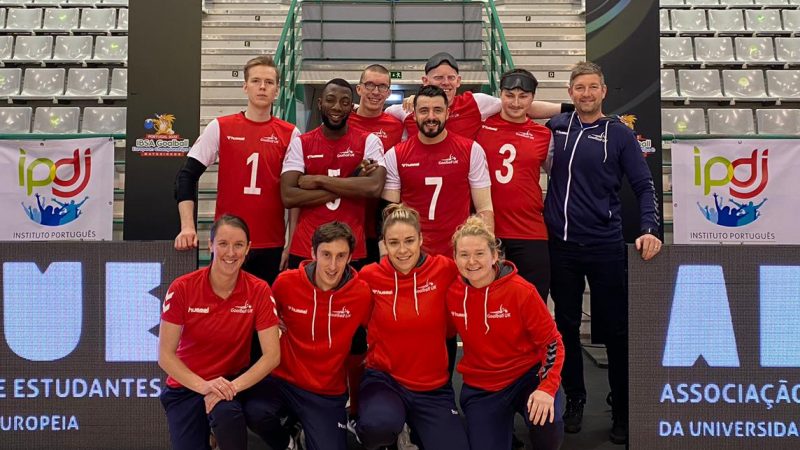 After an undefeated run right up to the semi-finals, GB Men faced Finland in a battle for bronze at the championships in Portugal on Saturday 19th November.

An incredibly close game followed, with GB proving a solid match for their opponents. Unfortunately, the GB squad lost out by just one goal with Finland closing the game 6-5.

The squad fought hard throughout the tournament, even beating both finalists in the group round. Despite a solid effort against Israel in the semi’s, GB were defeated 7-6.

Penalties were a problem for GB, with the team conceding goals after penalty calls got the better of them. However, for every goal against them, GB were quick to respond with an equaliser.

Dan Roper scored 23 goals across the tournament and Caleb Nanevie boosted the table with 19. Newcomers to senior international goalball, Josh Murphy, and David Scott, added 9 and 3 respectfully to the tally. Matt Loftus provided strong defence throughout in the centre.

Faye Dale, Head Coach for GB Men said “I am so proud of this squad. They brought everything to the tournament and surpassed expectations along the way. We are really excited about the IBSA World Games next August in Birmingham and cannot wait to put all our learning from this tournament in to practice. Personally, I am delighted with our efforts. Each member of the squad brought their A game and delivered.”

Gary Fraser, High Performance Lead at Goalball UK said “GB Men performed exceptionally well at the European B Championships and there is much to celebrate as we head into a busy 2023. I was particularly impressed by the way they navigated a challenging group to finish top, beating both finalists. Whilst the outcome is not what we wanted, the performances both individually, and as team, were incredibly good and this gives us a great platform to build from. We have a strong group of players in the current squad that are only going to get better.”

Mark Winder, CEO of Goalball UK said “A tremendous campaign and we missed out by the finest of margins. Be proud team. This is the end of a competition but… The end of the beginning for a talented group. This can be one hell of a journey.”

Goalball UK’s GB squads are backed by UK Sport, the National Lottery and the Peter Harrison Foundation. Without this support we would not be able to compete at this level, and we would like to thank them for supporting international goalball in the UK.