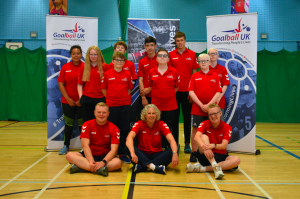 We can’t quite believe it, but we have been able to deliver another fantastic Goalball UK Summer Camp after almost two years away.

We set up our base at the brilliant facilities in Nottingham Trent University and welcomed nine children and young people along for an action-packed week of goalball! The overall objective of our Summer Camp’s is to help the youngsters to develop their goalball skills, as well as make new friends, and of course, have fun!

On the first day, we kicked off the camp with a few team building activities, before getting on to the goalball court to see talented players that had joined us.

Over the course of the camp there were opportunities for everyone to develop their goalball skills – from blocking and throwing, all the way to communication on the court. Despite the camp only being a couple of days long, it is fantastic to witness the growth of the players abilities, as well as watching them build their confidence on the court. 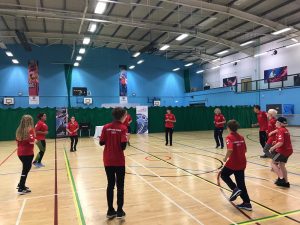 As so many of us had spent such long periods being in our homes, with limited access to sport and socialising, we put a big emphasis on making new friends and trying out new things.

This included having a game of blind football, which saw staff and players test their footballing skills in a friendly, but competitive, game. The players also had a go at blind cricket, with staff not able to avoid the temptation of giving it a go as well.

The Goalball UK Summer Camp was running alongside the inaugural #FindTheNext Goalball Academy Camp. On the first evening the two groups tested their knowledge on a number of topics, including Paralympic sports, in a quiz to get to know one another. 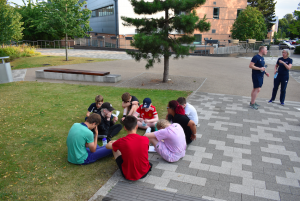 The final day of the week saw a goalball competition between the two camps. This was a great chance for everyone to test themselves and put everything they have learned into practice.

After four close games each camp had two wins apiece. To decide a winner, a penalty shootout took place with everyone from each camp taking it in turns to defend and attack a penalty.

The Summer Camp team were ultimately crowned winners of the tournament, winning by seven goals to one.

Ruby put what she had learned into practice throughout the camp and is now officially the youngest Goalball UK official at just 13 years old. So, from everyone at Goalball UK – well done, Ruby!

You will be able to learn more about Ruby and her goalball journey in her Featured Thursday article on 19 August!