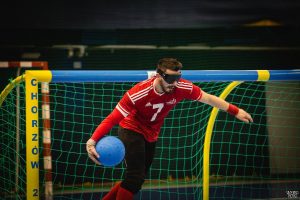 Goalball is a fast paced, action packed, 3 A side indoor game of attack and defence designed for people who are blind and partially sighted. ​

The non-invasive game is played with an audible ball, on a tactile court with all players wearing blackout eyeshades. The aim of game is to throw the ball (along the floor) into the opposition’s goal while defending your own goal. The team with the most goals win. At elite level the game is played over two halves of 12 minutes each according to the stop clock,  so usually lasting for approximately 50 minutes.

Goalball was invented in 1946 to help the rehabilitation of blinded war veterans. It was introduced to the Paralympics in 1976 and is one of the only sports specifically designed for visually impaired (VI) athletes, rather than an adaptation of another sport. ​