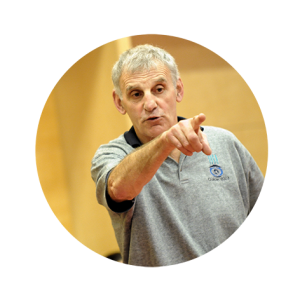 Clive was introduced to goalball back in 1978 when he was the PE teacher at what is now called New College Worcester, the school for blind and partially sighted students.

Out of the blue, a sport and recreation officer from the Royal National Institute of Blind People (RNIB) contacted Clive about the possibility of putting together a team of players to compete at the first Goalball World Championships in Austria. Despite not knowing anything about goalball at the time, it was an exciting prospect to learn more about a new sport for visually impaired people.

Managing to get three students from the college to sign up and two more from a ‘have a go’ session in Sutton Coldfield, Clive and the squad headed off to a small town in the west of the country to compete against teams from across the world.

” I have such fond memories of our first international tournament. Quite honestly, the competition was a bit of a mess, but tremendous fun.”

” The rules of the game were listed on one sheet of paper, but many countries had come up with their own rules, trying to figure out how we actually play the game was the first hurdle. I believe we finished 11th out of 12 teams, so this was a great success considering the circumstances!”

” Back then goalball was very different to the game we know now. The ball we used was essentially a medicine ball. It was very physical and players had to have immense strength to participate at any level.”

From this moment Clive was hooked. He saw first-hand the confidence in movement that playing goalball gave to these visually impaired students and immediately introduced it upon his return to New College Worcester, which at the time was an all-boys school.

Clive linked up with other specialist schools for blind and partially sighted students to introduce them to goalball, l such as the all-girls school Chorleywood College. He wanted as many young people as possible to give the budding sport a go.

Goalball had now arrived in the UK and clubs and leagues started popping up across the country as word spread about this exciting new sport. It was the only sport that was specifically designed for people with a visual impairment that wasn’t an adaptation of an existing game.

Alongside his teaching role, Clive’s blossoming relationship with goalball continued. He supported the game’s growth in a number of capacities with the likes of RNIB, British Blind Sport (known as the British Association of Sports and Recreational Activities of the Blind, or BASRAB, at the time) and IBSA (International Blind Sports Federation). He also coached teams and officiated at tournaments nationally and internationally, attending the Paralympics Games as a referee in 1988, 1992, 1996, 2004 and 2008.

Clive worked with British Blind Sport (BBS) to help bring the Goalball European Championships to the UK in Milton Keynes in 1987 and Loughborough in 1993, which was the last time they were held as a single event before splitting into leagues because of the growing number of teams participating. He then worked as the competition manager for BBS at the 2010 World Championships in Sheffield.

At the turn of the millennium came one of the most pivotal moments for Clive’s goalball journey. He was asked to coach the Great Britain women’s goalball team at the Sydney Paralympics.

” Sydney in 2000 was a remarkable time for myself and for goalball in the UK – it was the first time it felt like the sport had broken into the mainstream.”

“I was asked to coach very late in the day and preparing for such a responsibility was a bit of a whirlwind.”

Despite the eleventh-hour approach, Clive led the women’s side to a fifth-place finish, the highest placing of any Great Britain team at a Paralympics to date. However, this team was not exempt from the curse that has blighted many of England’s football teams in the past.

“We lost a penalty shootout.”

“We were tied with Spain at the end of the round robin games, so we had to reconvene on court for the shootout. As ever with these things, it was a nail-biting experience. After the first round of six penalties we were still level and it went to sudden death. Unfortunately, it wasn’t to be and we were on the plane home.”

Fast-forward eight years and Clive has his sixth taste of the Paralympics in Beijing. This time as a referee he is bestowed with the honour of officiating his first gold medal game, between the hosts China and Lithuania.

“There were 10,000 people in the arena and the atmosphere was fantastic. I believe what transpired in that game is one of the most astonishing moments in the history of goalball.”

“Lithuania were one up with about 45 seconds left on the clock. As many teams do when they have a narrow lead going into the final stages, they used a time-out to recompose and discuss tactics. What was unusual about this was it was their fourth time-out each team is only allowed three. It took a moment for us to realise what was going on as we were a bit puzzled.”

“Due to this error, the rules dictate that the offending team has to face a penalty. When we made this call the arena full of Chinese supporters erupted and we faced the problem of getting the crowd to be quiet so it could be taken!”

“The Chinese duly dispatched the penalty and the momentum was with them. Their next shot found the back of the net to take home the gold medal in the dying seconds. The roar of the crowd as the final whistle blew is something that will always stay with me. It was a real privilege to be part of such a momentous game.” 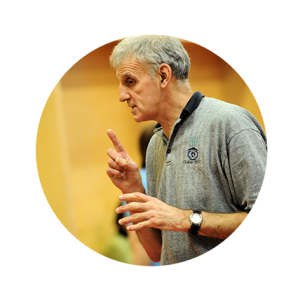 Clive continued officiating at international tournaments until 2011. He is still involved with the Goalball UK National Leagues and is also a trustee at British Blind Sport.

“I can’t quite believe how far goalball has come in the UK since its humble beginnings at that tournament in Austria. I love how the game has developed to become more dynamic in terms of the gameplay and the inclusivity for players of all ages, abilities, and even for sighted people.”

“One of the most gratifying things is the awareness of the sport continues to grow. More often than not these days when I say that I am going to a goalball tournament at the weekend, I am not met with a mystified expression and then have to proceed to explain what it actually is!”

“It fills me with immense pride being involved with this sport from the beginning in the UK. It is wonderful that so many people are passionate about it. The work Goalball UK has done in the last decade to provide more opportunities to play than ever is truly transformative for the lives of so many blind and partially sighted people.”

Thank you for reading Clive Spencer’s 10-year story. As a charity, your support is vital to Goalball UK. To help us continue our great work, please follow this link where you can donate to us.