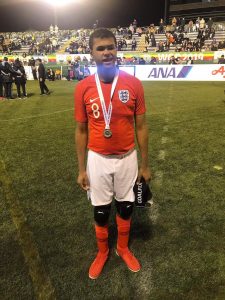 Today, we are featuring Rainbow Mbuangi from Merseyside Goalball Club:

I first got into goalball at school, St Vincent’s in Liverpool, when GB Men’s coach Faye Dale came in to deliver a taster session. It was a bit daunting at first, especially defending, as I was worried about being hit in the face! I really enjoyed the session though and thought that I did well offensively. Faye obviously agreed as she invited me to attend an upcoming Talent Camp at RNC Hereford.

I went along and it was a brilliant experience. I developed my goalball skills and made many new friends. We got to play with some of the Elite players and, during one game, I tried a new attacking technique I had only just learnt the day before and managed to score! Everyone told me how well I did, including some of the GB players, which made me feel much more confident.

My first goalball tournament, when I got to put my skills to use and meet some of the friends I had made at Talent Camp, was in October 2018. I can’t wait to get back to goalball soon and see everyone again! 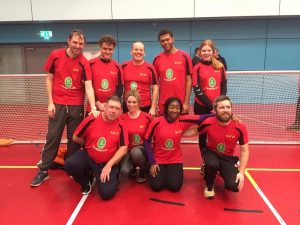 I have always been pretty sporty, loving rock climbing and running amongst many others. I followed a lot of sports too and I looked up to Roy Turnham, I saw him as an inspiration for what I could achieve through sports. So, when my PE teacher suggested that I went along to try football with Merseyside Blind FC, I knew I had to go!

I started playing and after a few months I went to my first competition in April 2018. This was in Belgium and was such a great experience! It went so well that they invited us back just a couple of months later which was even better. We played really well and in the final game I scored the winner to secure a first-place finish for our team!

I carried on playing and in November of that year the Senior GB team were set to play the Italian national team and they asked if the GB Youth team would be available for a game too. I was selected and ended up playing great, so much so that they asked me to play in the senior match as well. This was one of my favourite experiences, it was so special to be able to represent my country – a moment I will never forget!

The following year we went to the Blind Football European Championships where we played impressively and ended up taking home a bronze medal.

Football has opened so many doors for me and I am hopeful of one day representing Great Britain at the Paralympics. I also want to develop as a football coach as I take great joy from helping others and hope that I can inspire more people to try blind football.

I am a massive Manchester United fan and, thanks to the Guide Dogs #MeetAHero project, I got the chance to meet both Marcus Rashford and Jesse Lingard which was mind-blowing! They are idols of mine so it was great to sit down and talk about football with them. Here is a short excerpt. 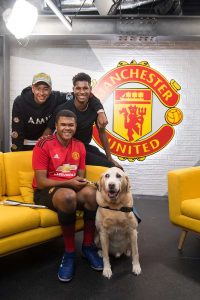 Sport is something that I think is important for everyone to take part in. At school we are involved in an initiative called Sightbox. We put together boxes of VI sporting equipment and send them around the world, to other blind and partially sighted children, so that they are then able to participate in sport too. You can find out more about Sightbox on their website.