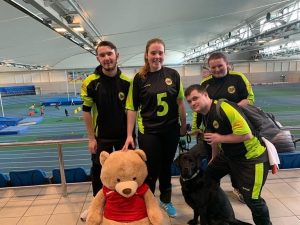 In one of the highlights of the 2021/2022 Competition Structure with the opportunity for teams to compete against players they would not usually test themselves against during the regular season, the 2022 Intermediate Trophy certainly did not disappoint!

Pool A featured Cambridge Gown, West Yorkshire, Lancashire Lions, Birmingham, Croysutt Warriors, and Winchester. After all, games were played, the standings were:

It was great to see the competitiveness between the teams throughout the pool games, with both of Pool A’s opening fixtures ending in a draw, with the game ending 7-7 between West Yorkshire and Lancashire Lions, and 6-6 between Birmingham and Croysutt Warriors. Winchester Kings topped the pool winning all of their games, it was not always plain sailing with super close fixtures against West Yorkshire ending 6-5, and Croysutt Warriors 7-5. 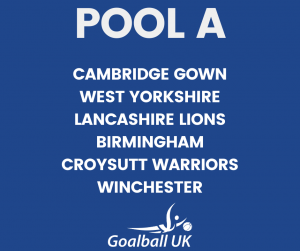 Pool B followed a similar path as Pool A, with RNC remaining with a 100% win record to book their place in the final. Cambridge Town closely followed in second, only losing to RNC 7-4 in their pool! As a result, Cambridge Town prepared for a bronze medal game showdown against West Yorkshire later on Sunday. Despite players of Scarborough York having to get quickly accustomed to playing together for the first time, there were certainly positives to take from the weekend in overcoming Nottinghamshire Sheriffs 11-1, and displaying resilient performances against London Elephants (losing 16-11), and Mersey Sharks (losing 7-5).

After all pool games were played, the Pool B standings finished: 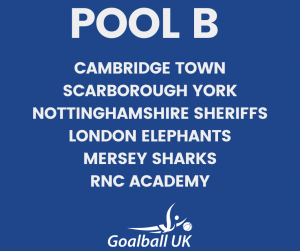 We had a very special guest join to support all teams at the Intermediate Trophy, with Dale the bear getting pictures with teams and staff throughout the weekend with Ruby Hudson of Scarborough York! 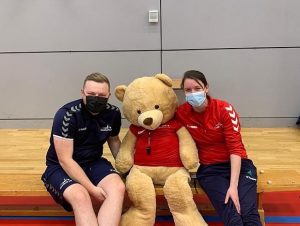 Extra throws were needed to decide 3 out of the 6 placement games! In an unfamiliar situation to some teams and players, the pressure was on to make their shot count for their teams. First up was Birmingham vs Scarborough York in the 9th-10th placement game, with 3 last-minute goals being scored leaving the game finishing 8-8 in standard time. Birmingham prevailed winning 10-9 after extra throws! 10-9, along with extra throws was the theme of the placement games with the next fixture for 7th-8th between Lancashire Lions and Mersey Sharks finishing 10-9 in the Lions favour!

It was the battle of the London outfits with London Elephants winning 5-4 against neighbours Croysutt Warriors. Congratulations to Yahye Siyad, making his return to goalball to win the top male goalscorer award after 22 goals across the weekend, well done Yahye! 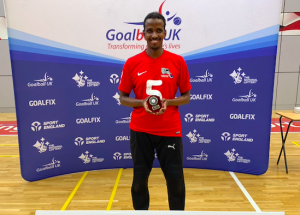 The bronze medal game between Cambridge Town and West Yorkshire did not require extra throws and ended 5-2 to Town, with Kali Holder winning a second accolade in being the top female (and overall!) goalscorer after netting an impressive 29 goals, in just 6 games!! 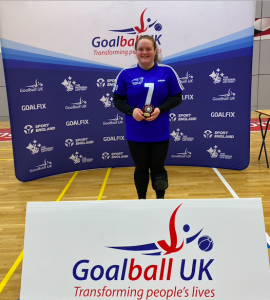 After an exhilarating few games to decide 12th-3rd, the scene was set for an exciting final between the only two teams who remained unbeaten, RNC Academy and Winchester Kings! You guessed it, extra throws decided the winner after late goals in regular time leaving the game 6-6. After an exhausting weekend for both teams, fighting for every result and overcoming every challenge thrown, extra throws seemed a fitting way to end the 2022 Intermediate Trophy. Winchester came out victorious, winning 8-6 after extra throws!! 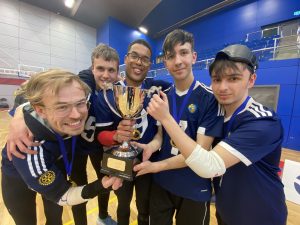 We hope everyone has had a chance to catch their breath!

Next up in the Intermediate calendar is Intermediate North Matchday 3 on Saturday 12th & Sunday 13th March 2022, at English Institute of Sport, Sheffield! This is closely followed by Intermediate South Matchday 3 at University of Reading Sports Park, Reading on Sunday 27th March!