Digging through the Archives – RNIB #SeeDifferentlyAwards 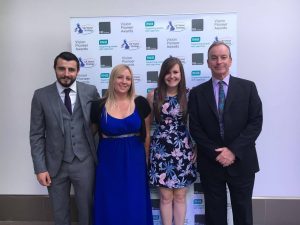 This week we are looking back the RNIB Awards.

This week, the Royal National Institute of Blind People (RNIB) have announced details of the 2020 See Differently Awards, providing us with the perfect opportunity to reflect on Goalball UK’s previous nominations for ‘Team of the Year’.

The awards celebrated the outstanding work of professionals in the eye health and sight loss sectors from across the UK – so Goalball UK were in esteemed company and delighted to have made the shortlist. The winners were the team from the Neuro-Ophthalmic Visual Impairment in Children clinic at Royal Victoria Hospital in Belfast.

Follow this link to a short summary video of the awards.

In November 2019, Goalball UK were again named as finalists for the ‘Team of the Year’. This time Mark Winder (CEO), together with development team staff members Alex Bunney, Kathryn Fielding and Tom Dobson travelled to London. 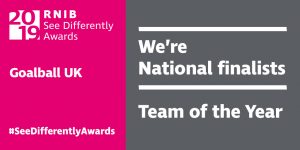 Follow this link to take a short trip down memory lane on our nomination last year.

Goalball UK were up against the ‘Be Active’ team from Bradbury Fields (a programme designed to tackle social isolation and loneliness for blind and partially sighted people in and around Liverpool) and The Scottish Centre for Personal Safety – with the latter being announced as the overall winner. 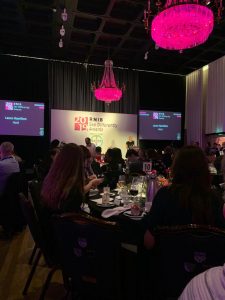 The other categories were – Campaigner of the Year; Innovator of the Year; Social Media Influencer of the Year; Community Contributor of the Year and Employer of the Year. There was also a Lifetime Achievement Award that was presented to Mike Brace who has been pivotal in the development of disability sport over the years through his involvement with Metro Sports Club, British Blind Sport and the British Paralympic Association, amongst others.

Details of the 2020 awards, which are focused on ‘Coronavirus Heroes’, can be found on the RNIB website. Follow this link to find out more!