Digging through the Goalball UK archives – A marathon effort! 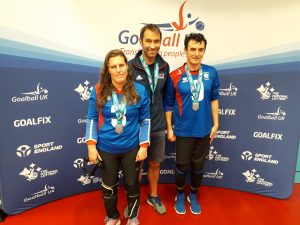 Following the virtual London Marathon on Sunday, this week we’re looking back at members of the #GoalballFamily who have previously run marathons.

Faith Cripps, physio to the GB Women’s squad has twice run the Brighton Marathon (in 2011 and 2012) and in doing so raised over £5,000 for Goalball UK. Likewise, Goalball UK staff member Kathryn Fielding ran the inaugural Yorkshire Marathon in October 2013 and raised over £1000. She has since run it another 2 times and hasn’t ruled out a 4th attempt yet!

Fellow Goalball UK staff member Steve Cox also has a bit of a marathon ‘habit’. He was due to run the Berlin Marathon on Sunday 27th September but that was unfortunately cancelled. Instead, he ran the virtual London marathon in Sheffield last Sunday. That now takes his tally to 12. His favourite marathon so far was London – the real one! – because of the atmosphere and a marathon that he would like to do in the future is the Midnight Sun Marathon in Tromso in Norway. This takes place annually in June when they have 24 hours of daylight. Therefore, even though it starts at 8.30pm, as the name implies, if you finish at midnight, the sun is still up! 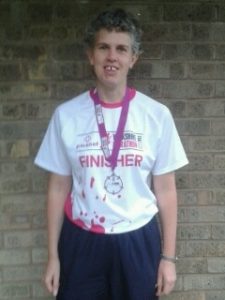 The ultimate goalballing marathon runner is Louise Simpson who has completed 21 in total! She ran the London Marathon in 2018 and 2019 and was due to do it again this year. Instead, together with her guide runner, they took part in the virtual event (in Cambridgeshire). Her favourite marathon is Chester which she has run 5 times! She has also run both the Brighton and Plymouth Marathons twice whilst a marathon that she would like to do sometime is Penang Bridge in Thailand. 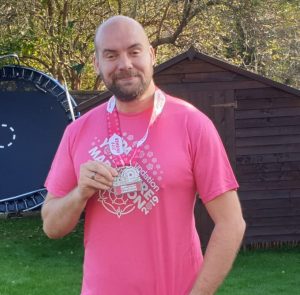 Finally, referee Clive Spencer has run 7 marathons including London three times. In his first London Marathon (in 1985) he ran a very impressive time of 2 hours and 49 minutes!

If running a marathon is on your bucket list, why not take on the challenge in 2021? The ballot for the London Marathon is now open but there are lots of other marathons around the UK and the world. Whichever marathon you decide to do, good luck, and please consider raising money for Goalball UK!