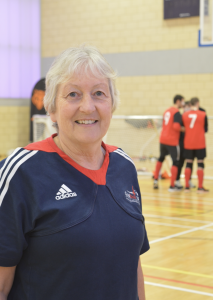 This week we caught up with Judith Oakley!

What is your role at Goalball UK?

I am an IBSA Level 2 qualified referee. This allows me to officiate at international tournaments as well as domestic ones. I am happy to volunteer in any role needed at any tournament anywhere! My aim is to do the best I can and be a good ambassador for Great Britain. When I was refereeing at a tournament in China, I received awards from both the Australian women’s and men’s teams. Each team has a theme and throughout the tournament they observe people. The teams make their awards independently and were very surprised that I got both. The men were looking for someone that went out of their way to make sure the tournament went as smooth as possible and that all teams felt valued whilst the women were focusing on the referees. They wanted a firm, fair and friendly referee who gave that little bit more! I’ve no idea what I did to deserve both awards but it certainly made me feel valued and I came home with their tournament mascots!

I found out about goalball while doing some work for the Youth Sport Trust. I was involved in the development of the TOP Sportsability cards and then was one of the tutors delivering the course. Quite a bit later (around 2009) I was asked to write some educational resources and I needed to know more about the game being played at a higher level. I met Maria Antrisou at a conference where we were both promoting inclusion and she mentioned she was doing her IBSA Level 3 certification in Manchester. I went to observe over the weekend and got roped in as a goal judge and table official! I was very surprised by how few volunteers there were, so I spoke to Clive Spencer, and offered to get involved. I don’t think he took me seriously as it was a minimum of 3 hours drive for me to get to any event. I was also involved with other sports but they had quite a few helpers and could share me! In 2010 I was a table official for the World Championships in Sheffield and it progressed from there. I didn’t intend to referee as I wasn’t sure I could commit to the role but a bit of arm twisting and the rest is history! 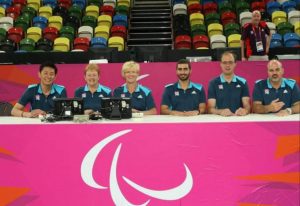 Is there a particular song, artist, or genre that you listen to before a tournament to get in the mood?

I don’t have a favourite artist or song. I rarely think to play music, I either like or don’t like what I hear on the radio, but to give you an idea of what I might choose to listen to these are a few of the CD’s I have: Peter Gabriel, Queen, Mike Oldfield, Enya, Elbow, Pink Floyd, Abba, Mark Knopfler, Beatles, Moody Blues, Jean Michel Jarre, Eagles, Rag n Bone Man, Adele and classical.

I don’t have any superstitions or rituals but I do like to be organised.

My favourite meal is any that I don’t have to cook or wash up after! I am partial to a roast dinner especially when shared with family and friends.

Which goalball player do you admire the most and why? Who do I admire?

That could end up a long list. It is probably easier to describe attributes so someone who:

· uses their gifts/privileges/knowledge in the best way possible

· is honest and hard working

My hobbies are reluctantly changing as I get older. My mind tells me I can still do things, but my body is struggling to comply. I adore horse riding but no longer keep horses. I love to climb mountains, go skiing and take part in adventurous activities but since having both hips replaced, I haven’t done any and will need to start from scratch again. Never say never! Since moving from Cumbria to East Sussex I haven’t had chance to join any sports teams, but it is on my to do list after lockdown. I love netball. I enjoy going to the theatre too. I don’t think it counts as a hobby but my grandchildren take up a lot of my time and that is great fun.

My bucket list to visit is quite long but at the top is Japan. I want to travel to as many different areas of the country as possible. I prefer the small villages or anywhere away from the cities. I want to experience the culture and landscape. The diversity, from what I have seen on TV looks amazing.