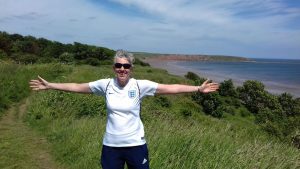 What club do you play for or coach?
Officially I coach both South Yorkshire and West Yorkshire but, as that isn’t physically possible at some tournaments, I have lots of help from players and/or their partners. I also (in my role for Goalball UK) coach new and developing clubs so you will find me on the bench at tournaments for various teams, including composites, as well as delivering taster sessions for schools/colleges/universities, community groups, partner organisations, etc.

How did you discover goalball?
The first time I ever heard about goalball was when I was at the Paralympics in Sydney in 2000. I had the option of going to watch GB play but, as I didn’t really know what goalball was, I went to watch wheelchair basketball instead! However, in 2003, I started work as the VI Officer at Disability Sport Yorkshire and have been actively involved in goalball ever since.

Is there a particular song, artist or genre that you listen to before a tournament to get in the mood? Or anything you’re loving at the moment?
I love Indie music from the 90’s but as not everyone else does we often just play ‘radio roulette’ in the car on the way to tournaments! Sometimes the songs can be quite apt. For example, I remember going to a tournament in Birmingham once with South Yorkshire and ‘Eye of the Tiger’ by Survivor came on that we all sang along to – very loudly. I also remember going to a tournament in Newcastle once with West Yorkshire and ‘Acquiesce’ by Oasis came on so “Because we need each other, We believe in one another……..” became our mantra for the day.

Do you have a favourite post-match meal?
Pizza followed by ice cream is always a good option. The nutritional value might not be great but it’s quick and easy to prepare (and requires minimal washing up) so I don’t care!

Which goalball player do you admire the most and why?
It’s impossible to select just one person as I have learnt so much over the years, and continue to do so, from so many members of the #GoalballFamily – not just players. Whenever we do the ‘line game’ as an ice breaker at events, I invariably find myself at the far end of the line (when it comes to length of time in the sport) but I am still able to learn new things from those people at the other of the line. That’s one of the great things about goalball. The togetherness. We’re all competitive but equally we will always help each other out.

Outside of goalball, what other hobbies/sports do you do?
Football has always been my big passion. I am a massive Everton fan – come on you blues! – and I played competitively for many seasons for clubs in Yorkshire and Merseyside. I have recently been coaxed out of retirement and have played in a number of ‘veterans’ tournaments! My main sport now though is triathlon and I compete in events all around the UK (sometimes as a guide for VI’s). parkrun is an important part of my weekly training programme and I strongly recommend anyone who wants to get fit and stay fit to give it a go. Aside from sport, I also love music (i.e. going to gigs) and travelling.

Finally, what place, anywhere in the world, is on your bucket list to visit and why?
I have been fortunate to visit many amazing places in the world already – I’ve travelled extensively around the USA, Canada, Australia, New Zealand, Brazil and Ecuador (including the Galapagos Islands) and have had some memorable ‘stop overs’ in Hawaii, Samoa, Singapore and Dubai along the way. A lot of my travelling is based around sport as I’m a ‘big event’ junkie so have been to lots of football tournaments (Men’s and Women’s), Olympics, Paralympics, Commonwealth Games, etc. I was supposed to be going to Japan this year but that has now been postponed until next year. I am also still trying to find the time (and money!) to go to South Africa as I didn’t make it in 2010 for the Men’s Football World Cup because I was at the Goalball World Championships in Sheffield and then the Blind Football World Championships in Hereford – it was a brilliant summer of sport.