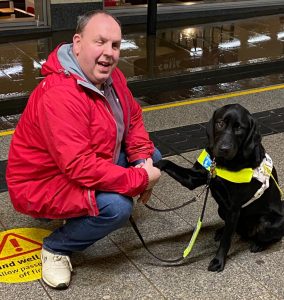 Each Thursday we want to put the spotlight on a person involved with goalball – from players, officials, coaches, or anyone!

This week we caught up with Michael Allen!

I currently play for Blackburn.

Several years ago, on behalf of VI Talk, I interviewed Kathryn Fielding about goalball for ‘Countdown to Sight Village’. I already played VI tennis and did some social activities with VI Bees so, having learnt more about goalball, I decided to give it a go. I spent most of my first training session walking around the venue lost! However, only a few weeks later I was making my debut at a Novice tournament in Sheffield (October 2017). My second tournament was in York (January 2018) and we won a silver medal. 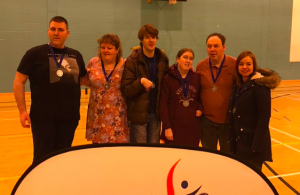 I like country music. My favourite artist is Alan Jackson, and my favourite song is “It’s 5 o’clock somewhere” as it’s very true!

Because there is usually a bit of travelling involved after a tournament, I often end up eating junk food – a pizza or another takeaway of some sort. 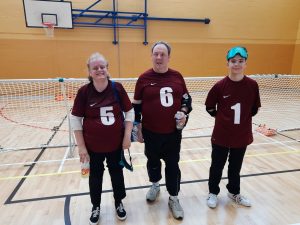 Ian Beverley was part of the GB Men’s squad that competed in the Sydney Paralympics in 2000. I’ve known him since I was about 12.

I’ve been saying for ages that I need to get fit but haven’t been successful yet! I do enjoy taking my guide dog Olga for walks though. At the last Novice competition, I met Jade Puckering from York and we discovered that her guide dog Oliver is Olga’s brother! Away from goalball I enjoy going to the theatre, especially to see musicals. It’s difficult to pick a favourite as I’ve seen so many good ones but, if I had to, I would probably say ‘Wicked’. I am a musician myself. I play keyboards and the guitar.

I love going to Disneyworld in Florida. I’ve already been about 12 times – it’s my ‘happy place’! I would also quite like to go on a world cruise.