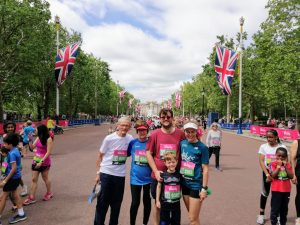 This week we caught up with Sue Manton!

What is your role within the goalball world?

These days I’m an occasional table official at tournaments but I have also been a coach (of a school team that represented GB in Florida), a goal judge (at Paralympic games in Atlanta, Sydney, Athens and London) and an official. In the early days of goalball development, I worked with the Youth Sports Trust, training trainers for their SportsAbility programme. I also worked with the East Midlands Exam board to have goalball accepted for GCSE PE. 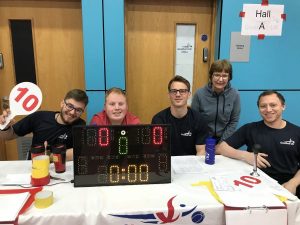 Way back in 1991, Mick Sullivan from the local society for the blind introduced me to goalball when I joined the education service for the Visually Impaired (VI) in Leicester. I was working at a mainstream school with a VI base and as a former PE teacher I was interested in the diversity of the PE curriculum. 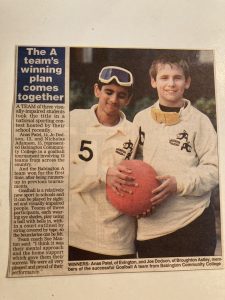 I’m going to say ‘Imagine’ by John Lennon as I heard it this morning, but I listen to and enjoy anything really. I miss Top of the Pops! My generation discovered the Beatles – I regret not seeing them in Leeds when I had the chance. I also like Bob Dylan, Bob Marley and Van Morrison and I remember seeing the Beach Boys at an early pop festival.

What is your favourite meal?

I quite like an English Breakfast or egg and chips but don’t have either very often as I try and eat healthy stuff.

Which person do you admire the most and why?

This has been a really good exercise for me as I don’t often reflect on things. I think that the combination of Sport and Volunteering is very special and rewarding. Add an enhanced sense of humour and you have the people I admire most. I found a scrappy bit of paper when I was looking through my memorabilia on which I’d copied down the words written on the mascot ball of the Canadian Women’s team (Paralympic champions in Sydney and Athens). They were:

What are your hobbies?

I love theatre. I have 2 actor daughters who are married to actors which makes life interesting and unpredictable. I also play tennis, parkrun and walk and I like sewing, knitting, cooking and baking.

What place, anywhere in the world, is on your bucket list to visit and why?

There’s nothing on my bucket list as I’m fortunate enough to go where life takes me. I’ve travelled to many parts of the world; via goalball including Poland, Australia, Bulgaria and the USA; mountaineering and skiing with my husband to the Alps, Peru and Argentina; and following my family of actors in the USA (e.g., San Diego, Baltimore, Pittsburgh, Denver and New York) as well as towns and cities in Great Britain that I wouldn’t normally visit. 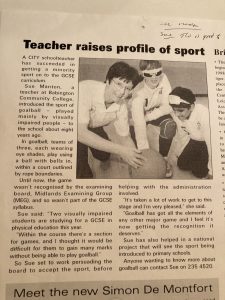