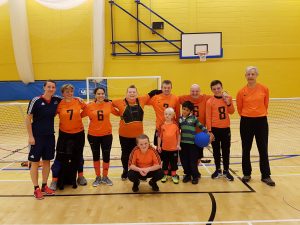 This month we caught up with Tommy and Sally Britton and Robin Faulkner – three of the people behind the London based Croysutt Warriors, who have become one of the biggest goalball clubs in the UK.

The story of how Croysutt Warriors became one of the most active goalball clubs in the country starts with Robin Faulkner. Robin is the chair of the largest table tennis club in Croydon, South Croydon Table Tennis Club, in 2014 he was approached to be a community sport partner for Streetgames, the initiative that uses sport to create positive change in the lives of disadvantaged people.

“Streetgames is a fantastic cause and I loved being involved with the project. I helped to modify versions of sports that can be delivered everywhere without a formal setting. As part of the ongoing work we were looking for sports that were truly inclusive and after some research we discovered goalball, which fitted the bill perfectly.

“The main purpose was to establish a goalball club in Croydon and ensure its sustainability, but at the time, we had little idea how that might be achieved! So, in 2014, I reached out to Goalball UK and Alex Bunney really helped us to get the ball rolling with a few taster sessions. It only took two months before we hosted our first session and Alex encouraged us to start doing them fortnightly.

“The early sessions were patchy for numbers, but my philosophy with these things is to provide consistency. I don’t believe that if at one session no one turns up – which we did have – then the next session should be cancelled. This is particularly true when dealing with any group of differently abled people. They need time to be comfortable with the venue, the travel and the atmosphere before they will be willing to commit to a longer-term relationship with a club or organisation. We persevered and along came Tommy Britton.”

At this time, it was not long since Tommy Britton had lost his sight, and with that, his career as a chef. Tommy recalls that at the time he was in a bad place and was seriously struggling with his mental health.

“I found my visual impairment very isolating and became quite reclusive. I was in a physical slump. That was before I had contact with my rehabilitation officer for the visually impaired, Greg, who pulled me out of the mire. It was he who nagged me into trying goalball. It took a little while for me to finally attend a session. But as soon as I did, from the first ball I became absolutely hooked by the sport and I couldn’t get enough of it.

“At the beginning, one of the most amazing things that I found about the sport was that it was helping me to relearn old skills which I lost with my sight. It’s stuff that we can take for granted, like being confident enough to take public transport alone. But the belief I got from playing goalball gave me the determination to become more independent.

“It was at these taster sessions that I met Robin, who has become a really good friend. He inspired me to work with him to help get the club off the ground as it was evident the positive impact that goalball has for visually impaired people. I wanted everyone that was like me to experience the benefits of this sport.”

After playing goalball for a while, Tommy encouraged his family to get involved with Croysutt Warriors. Now his wife Sally and daughter Tiffany-Jade, who are both sighted, play alongside him.

Sally recalls, “It was really emotional seeing Tommy develop into a good goalball player and watching him grow stronger by the day, like the man he was before the tough times started. We both believe that without goalball, he would have not retrained professionally to become a psychologist and set up his own business.

“I love playing alongside my husband and daughter, it has been great for our family. It has made us even closer and it has also given me an insight into his life and the impact it had on him. Goalball has also been massively important for Tiffany-Jade, who has a form of autism. The sport has taught her so many new skills that have really helped her with day to day life.”

With the Brittons on board and Robin as chairman, Croysutt Warriors have continued to go from strength to strength. They entered their first tournament in September 2015 and have since had teams in every national competition they have been eligible for.

Along the way, Croysutt Warriors were the novice shield winners in 2016/17 and 2018/19, the Regional C South and East winners 2018/19, and collected a number of gold, silver and bronze medals at intermediate level, along with several individual honours. Whilst in the novice leagues, the produced a magnificent unbroken streak of six gold medals.

Croysutt Warriors have also performed on the international stage at the Malmö Open. They won all but one match and their team had the tournament’s top – and record for the competition – goal scorer Jack Peters.

“The progression the club has made makes me really proud.” Robin says. “However, what is really special is witnessing the journey our players go on. Most are timid and hesitant at first, but they often blossom into more confident, fitter, happier people who are at ease with their different ability. This is at the heart of what we’re doing.”

For Tommy, being part of a club that is developing into a real asset to his hometown and community is something that he is particularly proud of.

“This club continues to amaze me. We have gone above and beyond what we thought would be possible and we continue to outgrow ourselves. A real indication of how far we have come is that people around here know who we are and what goalball is. Even a few years ago we couldn’t have imagined that. The inclusive community aspect of the club is massively important to me – we want the club to be accessible to everyone. Regardless of age, ability or level of sight, we want people to come along, have a good time and make some new friends.

“We estimate that so far we have had around 70 different people from the local area either play for Croysutt Warriors or attend training. Considering that we started a few years ago from nothing, this is massive for us. However, we know that there are so many more people out there that could really benefit from our club, so the hard work continues to reach these people and encourage them to have a go. To do this, we have also been ramping up our fundraising efforts.”

As the club has continued to evolve and the networking in the community has grown, Sally has become more involved on the operations side of the club and is now the treasurer.

“I’ve experienced first-hand what a goalball club can do to someone’s wellbeing, so I was really eager to help out in any way that I could so that we can be there for more people. Our main goal is to keep going with the great progress we have made so far. For me personally, this experience has given me a new outlook and I try to help out in the community in other ways too. For instance, last Christmas we took the time to help the homeless and I provided haircuts at the local crisis centre.” 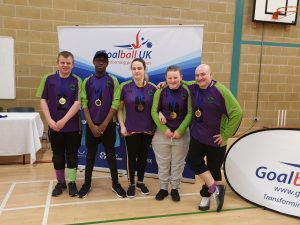 With Croysutt Warriors now firmly established as a flagship goalball club, the team now moves on to the next stage of its development. Robin says, “We must consolidate our gains so far and provide succession planning for the future. The aim is to continue to make steady progress and we want to have at least two competitive teams at every level the game is played at domestically. It is also really important for us to continue to spread the sport throughout our region and increase the work we do in schools.

“That’s not to say that we do not have big ambitions for Croysutt Warriors and the sport. I think the dream for all of us is to one day help to create a dedicated goalball centre in the South East.”