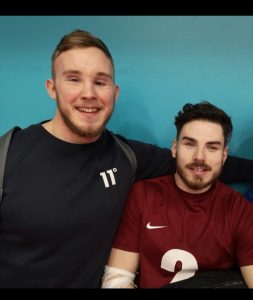 For our last article in the series, we are focussing on the inseparable friendship between Josh Windle and Josh McEntee.

For those that have attended Goalball UK national league events and competitions, many will have noticed that best friends Josh Windle and Josh McEntee are often as thick as thieves before and after matches. The pair, who met through goalball, both have remarkably paralleled stories.

When they were similar ages in their early twenties, both were involved in accidents that resulted in sight loss. Naturally, for those that have lived for many years with full vision, for it to be gone in an instant is incredibly difficult to cope with.

Josh Windle recounts his journey: “After my accident and losing my sight I was in a really bad place. I had always been pretty sporty, so not having that in my life anymore was particularly difficult.

“I don’t think I had left the house for almost six months and it was hard to find the confidence and motivation to do so. But when I first started going out again one of the first conversations was with Citizens Advice, who told me about a local blind charity in Selby. Through them the first thing I attended was a goalball event put on by Kathryn Fielding. It blew my mind that the sport even existed!

“From there, Kathryn invited me to play with West Yorkshire and I just fell in love with the game. Unfortunately, due to my injuries I haven’t progressed at a pace I would like, but I am loving the journey.”

For Josh McEntee, following his accident, as well as losing his sight, both of his legs had to be rebuilt and he needed to learn to walk again. He worked closely with rehabilitation officers for the visually impaired in his local area and was convinced that goalball could be a great way for him to get back into sport to rebuild his strength.

“When I started playing goalball, it was a major milestone in my journey of recovery and inspired me to live my life to the full once again. I met Josh at one of my first Goalball UK National League events when I was playing for Lancashire Lions and we instantly hit it off.

“When Josh and I first became friends, having someone that I could relate with through our personal experience was so important. I kept thinking “if he can do it, then so can I”. This was not only in regards to playing and excelling at goalball, but with many other obstacles that you face after losing your sight.” 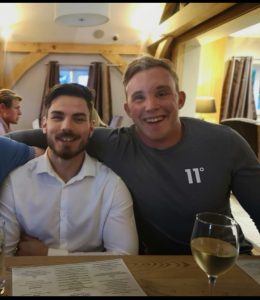 Speaking about their friendship, Josh Windle said: “It really is a long road with loads of ups and downs when you’re coming to terms with sight loss. As Josh and I clicked, we were really able to bounce off each other. We obviously have what we had experienced in common, but there are so many more things we share that really enabled us to motivate each other to keep pushing ourselves.

“When you have a bad day, having someone like Josh that you can rely on is so important. He’s an incredibly loyal friend. We’re always there for each other through the good and difficult times.”

With their newly found confidence and friendship, both Josh Windle and McEntee are more determined than ever to demonstrate this on the goalball court.

Josh Windle said: “When I think back to my performances when I first started to where I am now, it really is unrecognisable. I would love to be selected for the men’s Great Britain Men’s squad one day and having this goal to aim for, with the support of my family and friends, is something that motivates me each time I step on to the court. The coaches that I have worked with, such as Faye Dale at talent camps, have really inspired this belief that I can achieve so much playing goalball. 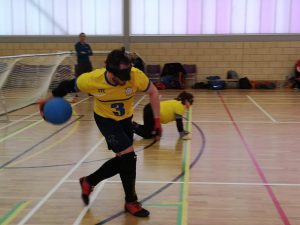 “At this stage it is all about keeping myself surrounded by great people and continuing to develop my game. The sport might appear simple from the outside, but when you’re actually on the court you realise just how complex it is. I have always been a fairly competitive person, so having goalball in my life now really complements me as a person.

“It has also been fantastic that my partner Kellie has also embraced the sport. She has been with me through everything and is now coaching and helping out at West Yorkshire. It makes the sport so much more special to share it with the people that are closest to me. I now truly believe that I can overcome any obstacle – my transformation from just after my accident to now has been amazing.” 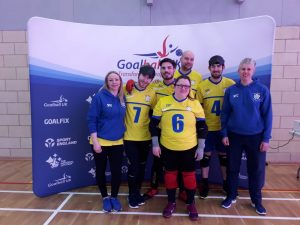 Josh McEntee reflects on his passion for the sport: “I fell in love with goalball instantly as it is so intense and challenging. From the outset, I have always had the ambition to be the best I can be and represent Great Britain.

“In 2018, I was selected for the Great Britain men’s squad and got to compete with the team for the first time in Budapest that year. It was an incredibly nerve-wracking experience but I’m so proud of what we achieved. Playing for my country at an international tournament is one of the highlights of my goalball journey so far.  At this stage of my goalball career, I really want to focus on staying as fit as possible as I am prone to the occasional injury.” 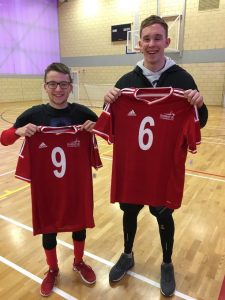 Josh McEntee attributes the new found self-belief he discovered from his goalball experiences to many more positive changes that have taken place in his life – from setting up his own charity and getting into property development, to having the motivation to travel the world.

“Being involved in goalball has enabled me to overcome my sight loss and supported me in making significant strides in other aspects of my life. The sport teaches you so much, from solving problems to becoming more self-sufficient, it was really important for me to use this to try to make a difference elsewhere. 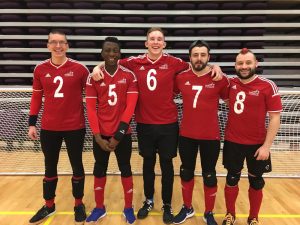 “That is why I have set up Inner Strength Sports, an organisation that teaches martial arts to those with sight loss and other disabilities. From when I lost my sight it has always been a massive goal for me to use the power of sport to give something back. This venture will allow me to utilise so many of the skills that goalball has taught me and hopefully help people with disabilities realise the incredible amount they can achieve.”

Josh McEntee concludes: “My progression in the sport has been fairly rapid, as it took around two years to break into the Great Britain Men’s squad set-up, and my overall ambition is to one day represent my country at the Paralympics. But it is just as important for me that my friends, like Josh, and my teammates are doing well and getting the most out of the sport as possible.” 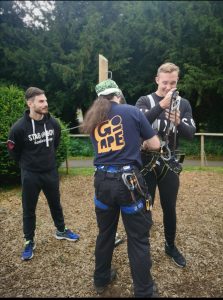