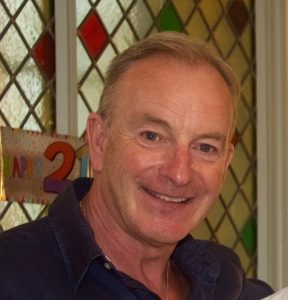 The third in the series is Mike Reilly, whose career in marketing, working with some of the biggest names in English football, led him to take on the role of Goalball UK’s chairman and chief executive.

As a sports fan, working in sports marketing was a dream for Mike Reilly. After selling his business to a top 20 marketing firm, he went on to work with some of the biggest names in English football. With his CV containing the likes of Manchester United, Fulham and Watford, it may have seemed a curious decision to take on a non-executive director role at a little known National Governing Body (NGB).

But Mike was persuaded and he quickly attended a training session.

Mike joined Goalball UK nine months after it was formed in 2010. But in the early stages of the NGB it was experiencing numerous growing pains as it looked to establish itself. Within a year the then chairman and chief executive had decided to move on and the organisation was at a point where it needed stability and guidance.

“On behalf of the board I met with our two key stakeholders – UK Sport and Sport England – to discuss how we could get over the present predicaments and ensure the sustainability of Goalball UK. Three parts of the organisation urgently needed addressing – financial systems and processes, governance, and internal communications. This was one of the most important meetings that we had in this period as it gave us a common goal to work towards to attempt to get everything on track.

Mike quickly did some firefighting and then got a call from Sport England to ask if he would consider being joint chairman and chief executive to get the organisation on a better footing.

“I was again initially reluctant to take on more responsibility at Goalball UK, but at the same time I did feel like it was something I had to do to take the organisation forward. Thankfully things progressed very quickly, we gained the confidence of our two critical stakeholders and they became willing to support us.”

“It was imperative that there was a Great Britain team at the Paralympics on home soil. We knew that we had the talent within our ranks, but the performances leading up to the Games hadn’t really represented that. The British Paralympics Association needed assurances that the teams were not going to be out of their depth on the biggest stage of them all.

“I recall producing many presentations for the BPA about the progress both the men and women were making and why they deserved to be in the competition. We really did everything we could to convince them of the quality in the squad. All the hard work of the Goalball UK staff and players came down to a simple yes or no from the BPA.

“I was told that we would be informed of their decision at noon on a certain day. As soon as the clock struck midday my phone rang and I will never forget that phone call, it was one of the most nerve-racking moments in my career.

“Before I could speak, they said, “Mike, I have two pieces of good news for you…” and at that moment the sense of relief I felt was not like anything I had ever experienced. All the hard work everyone had put in had paid off and we were going to the Paralympics with two teams!” 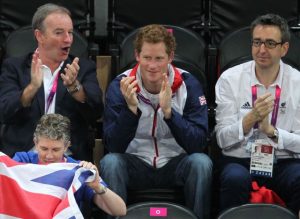 For Mike, being at the Paralympics with the Great British goalball squads was one of the highlights of his tenure. However, in typical British fashion, the teams did not go about it in an easy way.

“We proved many people wrong at the Paralympics and showed that we can compete with the best goalball teams in the world. The women’s side, in particular, exceeded all our expectations making it into the quarter-finals.

“The drama of that quarter-final match was incredible. The team was so close to progressing but were eventually undone by a golden goal. At the end of the match I was initially deflated, but also filled with such an enormous sense of pride, not just because of the sensational performances, but for the entire organisation that had got us to this point.

“Hearing the immense crowd packed in the Copper Box cheering on our teams and our sport was a real vindication of what we had been striving to achieve. What we managed to do in such a short space of time was a mammoth effort. But it is something I would happily do again to see the look on the players faces as they walked out on to the court to represent their country at the world’s biggest competition.”

Mike and the Goalball UK team also introduced the End of Season Tournament, which to this day is a staple of the goalball calendar.

“I loved the End of Season Tournament we introduced for all the clubs across the country. It gave each player the opportunity from all levels to come together to celebrate everything goalball was about. The annual event also allowed us to reflect on how the game was growing, share what was going on regionally and offer ideas about what else could be done.” 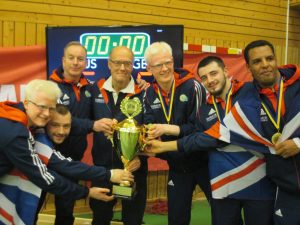 “Goalball appears much faster and more competitive than I imagined it would be when I started working in the sport. The teams and structure that are now in place mean we can get more people playing and nurture the talent coming through. My overall ambition when I started was to boost the numbers playing because I saw early on what a positive impact it can have for those with no or limited sight.

“I’m proud we came up with the tag line ‘Transforming People’s Lives’, it really says it all. Goalball provides such a fantastic opportunity for VI people to connect with each other, alongside keeping fit and active. To see the foundations that we put in place, how the NGB has developed and expanded, is so satisfying.”

“Of course, it is fundamentally all about the participants – incredible individuals, passionate and awe inspiring. I still keep very much up-to-date with everything that is going on within the world of goalball and I love hearing about the amazing achievements of the clubs and players up and down the country.”