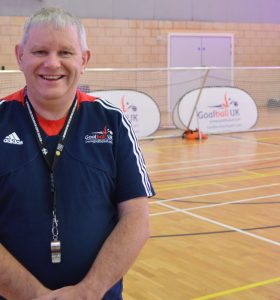 This month we spoke with Robert Avery, who talked to us about his journey, what it takes to become one of the best goalball referees in the world and the development of the sport at York St. John University.

Robert Avery’s journey to become one of the highest regarded goalball referees in the game started back in 2010. He had been working in the rehabilitation of visually impaired people since 1983 and so had been aware of goalball for many years, but it wasn’t until much later that he got his first experience of the sport in action.

“For quite some time access for people to play goalball was pretty limited. It was predominantly available at a handful of clubs around the country or in specialist schools. I moved down south from Glasgow to take a role at York St. John University to continue my work in enhancing life opportunities for blind and partially sighted people. Following on from the World Championships taking place in Sheffield in 2010, I was approached by two of our students, one from physiotherapy and the other from sport, about whether we could do something positive with the inspirational experience they had.

“The rehabilitative potential of the sport and the positive impact it could have on the lives of those that were participating fitted with our professional backgrounds and it gave myself and my colleagues an overwhelming drive to work to increase the awareness of the sport so that more people could have the same opportunity as the players at the World Championships.

“We decided the best way to do this was to start our own club in York. We wanted it to be a real community club that is open to people of all ages and abilities.”

Less than 12 months later, the club was established with Robert coaching the team. The York Goalball Club entered the National Leagues at novice level but soon rose the ranks. The team gained the reputation as one of the most up-and-coming clubs in the UK. 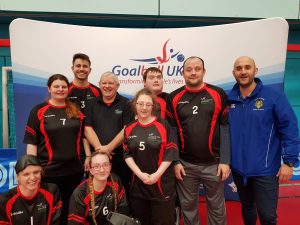 “Before I knew it, I was spending every Saturday morning coaching the club, and in the summer months before I went off to play cricket in the afternoon. Even though the club was separate from the university, York St. John were really supportive of what we were doing and allowed us to use their facilities free of charge. We were incredibly fortunate and extremely grateful for this, as the costs of hiring a sports hall is the main obstacle for many goalball clubs.

“As the team started to get better, competing at the top end of the Goalball UK National Leagues, that’s when I decided to start my training to become a referee. In all honesty, I had little intention of actually being an official, I saw it as a chance to learn the game inside out so I could potentially spot opportunities to bend the rules in our favour!

“However, often the referees at national competitions can become stretched as there are sometimes very few, so I started officiating matches more and more. I had previously umpired cricket matches, so I think those experiences and my general calmness helped me to oversee goalball contests. 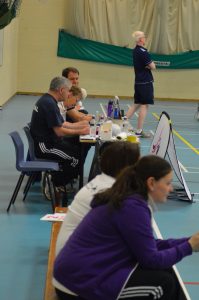 “I suppose I really caught the bug for refereeing and carried on progressing by doing more training courses. This then led me to take part at refereeing at my first international tournament in Bruges.

“This was a really different compared to officiating in the UK where I knew everyone playing, which was just like overseeing a game between friends. On the international stage, there wasn’t the same relaxed atmosphere. There was also the added pressure of representing my country. A few of the coaches at this tournament would try pushing their luck because they recognised that I was new to officiating. But the games were always played in the right spirit and I thoroughly enjoyed my first taste of international goalball.”

Robert continued his upward trajectory in the refereeing world, similar to that of an international elite goalball player. He was a referee at the European C Championship in 2015, the B’s in 2016 and then the A’s in 2017. Since gaining his goalball refereeing qualification eight years ago, Robert has refereed 80 domestic tournaments. He has also had the opportunity to officiate international competitions across the world, including Sweden, Bulgaria, Portugal, Lithuania, The Netherlands and America.

However, it is the summer of 2021 which is going to be the biggest milestone to date in Robert’s refereeing journey, as he will officiate at the Paralympics in Tokyo.

“I am really proud to be heading to Tokyo next summer to be part of the Paralympics. When I started officiating goalball matches, I couldn’t have imagined that I would be a part of one of the biggest sporting events in the world. I was lucky enough to be at London 2012 with Goalball UK, which was an incredible experience to be in the Copperbox and witness that atmosphere first-hand.”

Robert hopes that his experiences will inspire more budding officials to take the plunge and become goalball referees. 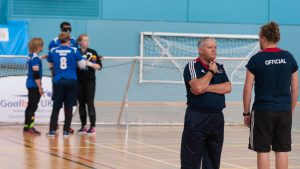 “There are a number of things that I could say to someone thinking about giving it a go, but the main thing to do is learn the rules inside out. Having that knowledge to fall a back on is massively important when overseeing a game of goalball. It might sound obvious, but the ability to remain calm in a stressful situation is also vital. And finally, like any ocupation, personal development is essential. After competitions I’ll always find some time to watch back the games that I officiated to analyse my performance to see where I can improve.

“It is also so much fun being a goalball official. There is a lot made of the community of players in goalball, but we officials are also very much part of that. What’s more, the officials have our own separate communities set up for us to discuss the game and certain players and coaches to look out for, as well as sharing tips and insights.”

Off the court, Robert has been pivotal in harnessing the relationship with York St. John University and Goalball UK, which has seen the Great Britain men’s team work with staff and use the university’s facilities for strength and conditioning training.

“We recognised that there is massive potential to support Goalball UK, the athletes and the development of the sport in general at York St. John University.

“I knocked at many doors to get colleagues at the university interested in goalball. Being an international referee definitely helped to raise the profile of the sport at the university and now plans are coming to fruition. Students have been researching injury prevention and the sporting development of elite goalball players. This work is the first of its kind for goalball in the UK. 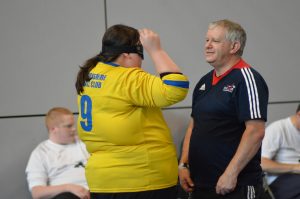 “This has been a highly collaborative scheme so far, with a great deal of knowledge being shared between Goalball UK and York St John University. We hope that this will have a positive impact for everyone involved with goalball for generations to come – from the players from grassroot to elite level, to the officials up and down the country.”