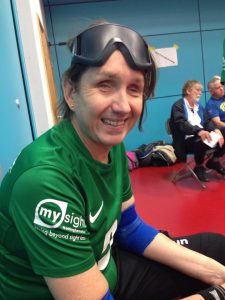 To coincide with the start of Pride Month, for the fourth story in this series we spoke with Sarah Stephenson-Hunter. She was pivotal to setting up the Nottinghamshire Sheriff’s Goalball Club and speaks about the positivity and inclusivity of the goalball community when going through a major life event.

“Goalball in the early 90s was very different to the game we know now. We played without pads, the ball was much heavier and the game in general was a lot less organised. However, it was very competitive and I really loved that nature of the sport. It was something that was completely new to me and I relished the opportunity.

“What remains the same from the 90s to the present day is the community of players. No matter who you played for, there was a real sense of comradery, unity and togetherness between the players. It was our sport, specifically designed for people like us, and we all absolutely loved it. As we were all in the same boat, it removed so many barriers and we could all just be ourselves. We didn’t have to be concerned with all the things people with limited or no sight often are.”

The trio went about setting up the Nottinghamshire Sheriff’s Goalball Club, which has since gone on to be one of the biggest in the UK. 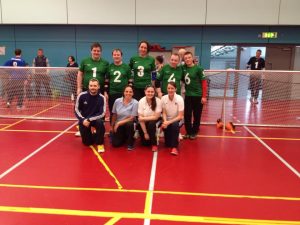 “Setting up the goalball club at the university was something I was really eager to be involved with. Our vision was for it not to be exclusive to the students, but benefit the blind and partially sighted community throughout the city and beyond too. Having a goalball club here for people of all ages was important to me as it was something that I knew I would have gained so much from when I was younger.”

“When I was going through my transition, I always remained adamant that I wanted to carry on playing goalball, as well as cricket. Of course, there was a slight apprehension as I had no idea how people would react. I first spoke with Hannah and Faye to see if they could foresee any issues and they were very supportive. It was a new situation for them and they handled it so kindly and sensitively.

“Upon my return to the goalball community I was welcomed back with open arms. I can honestly say that I have never had any problems within our club or at any competitions. Everyone involved in the sport is so very determined to provide total inclusivity, especially at the competitions that we play because men and women compete on a level playing field. This transitional period was very difficult for a number of reasons, but I was so grateful to have the wonderful support of the communities at my sporting outlets. The togetherness and comradery, as well as everyone’s understanding was so significant for my wellbeing.

“There is one particular goalball memory that will always remain with me. We organised a varsity game between both universities in Nottingham and I was awarded the female player of the match shortly after going through my transition! It might seem small, it for me at that time, it was a massive boost to my confidence as I felt truly accepted for being myself.” 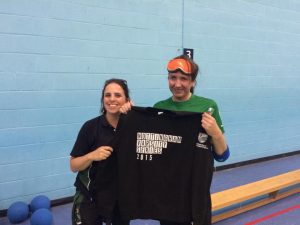 Off the court, Sarah was one of the 15 blind and partially sighted players and volunteers completing The Coast to Coast, a 170-mile ride from Morecambe to Bridlington on tandem bikes in four days, to raise funds for Goalball UK.

Sarah finally retired from playing a couple of years ago and recently moved to Oxford. She is no longer involved with her former club, but she remains is thankful for the opportunity goalball gave to her and others like her.

“Playing goalball has given me so much confidence and positivity in my life. It’s so great to see how it’s come on in leaps and bounds since I first played it. Here’s to bigger and better things in the next 10 years!”