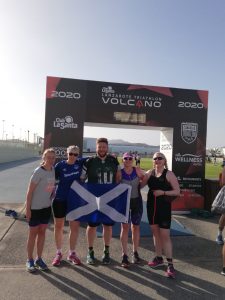 Today, we are featuring Paul Cunningham from Glasgow Goalball Club:

I first tried goalball at a Scottish Disability Sport VI Sport engagement day in Falkirk in November 2016. It wasn’t quite Paralympic standard – we were playing in a small, carpeted room with a soft ball! – but I enjoyed it. I already knew Andrea Logan (who played for Glasgow Goalball Club) and she convinced me to go along to a club training session. So I did and have been going ever since. Playing in the Home Nations tournament in York in September 2018 was brilliant. It was the first time that I played in a competitive tournament so I learnt so much. Everyone definitely upped their game. We had great fun off the court as well, socialising with everyone. 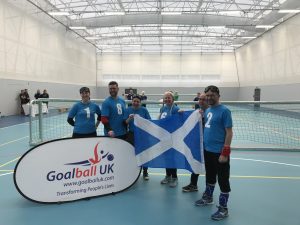 I went along to an introductory VI triathlon training camp in the Lake District in June 2017 organised by Vision of Adventure and really enjoyed it. The coaches and the guides were amazing. I was scared about the cycling as I had previously had a go on a tandem at a velodrome and it wasn’t a positive experience as me and my pilot were physically mismatched – she wasn’t able to cope with the surge of power from my Chris Hoy-esque quads which up ended the bike! On the training camp though, I was paired with a male pilot of a similar build to me so it was much better. We had a quick practice ride around an empty car park and then went out on to the roads. The sense of freedom, feeling the wind and the speed, was great. It was like being young again when I had more sight and used to ride a solo bike. 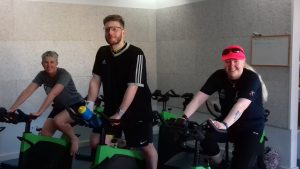 I never thought I would do a triathlon but by the end of the camp I was like “Bring it on”! I therefore found myself on the start line of the Kendal Triathlon in September 2017. The swim and the bike went well but I was in pain for the final part of the run. I made it to the finish line though and in a really good time. I could barely move the next day though! I’ve done Kendal Triathlon a few more times since as well as Lancaster Triathlon and the National Paratri Championships at Eton Dorney. I have also been to a couple of training camps (with friends from Vision of Adventure) at Club La Santa in Lanzarote. Training in the sunshine is lovely!