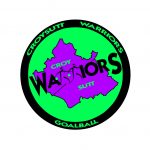 Team information: Croysutt Warriors came from humble beginnings back in 2014, after chairperson and coach Robin Faulkner was looking for a sport in his words, that was truly inclusive. Along came goalball, and the rest is history! From hosting sessions with nobody turning up, to having a record of 70 people playing or training for the Croysutt Warriors as of 2020, the club has grown from strength to strength with the help of passionate members. The Warriors have been represented at every level of domestic play during the 2021/2022 season and have completed their first season as a Super League club, finishing 8th out of 9.

As this season is their first as a Super League club, this will also be their first Goalfix Cup as Croysutt Warriors solely. In 2019, the Warriors merged with London Elephants to make London Croysutt meaning players will have experience competing on the big stage. The experience within the team internationally will also boost their hopes with Lois Turner being a member of the Great Britain Women’s Squad. Lois will be playing alongside Jack Peters, who has represented Great Britain at youth level, as well as Alex Ulysses who recently competed at the Malmö Lady Intercup with the senior Women’s squad. Therefore, Croysutt Warriors will surely be hoping to climb the rankings to end their season on a high after a positive start to life at the highest level of domestic goalball!