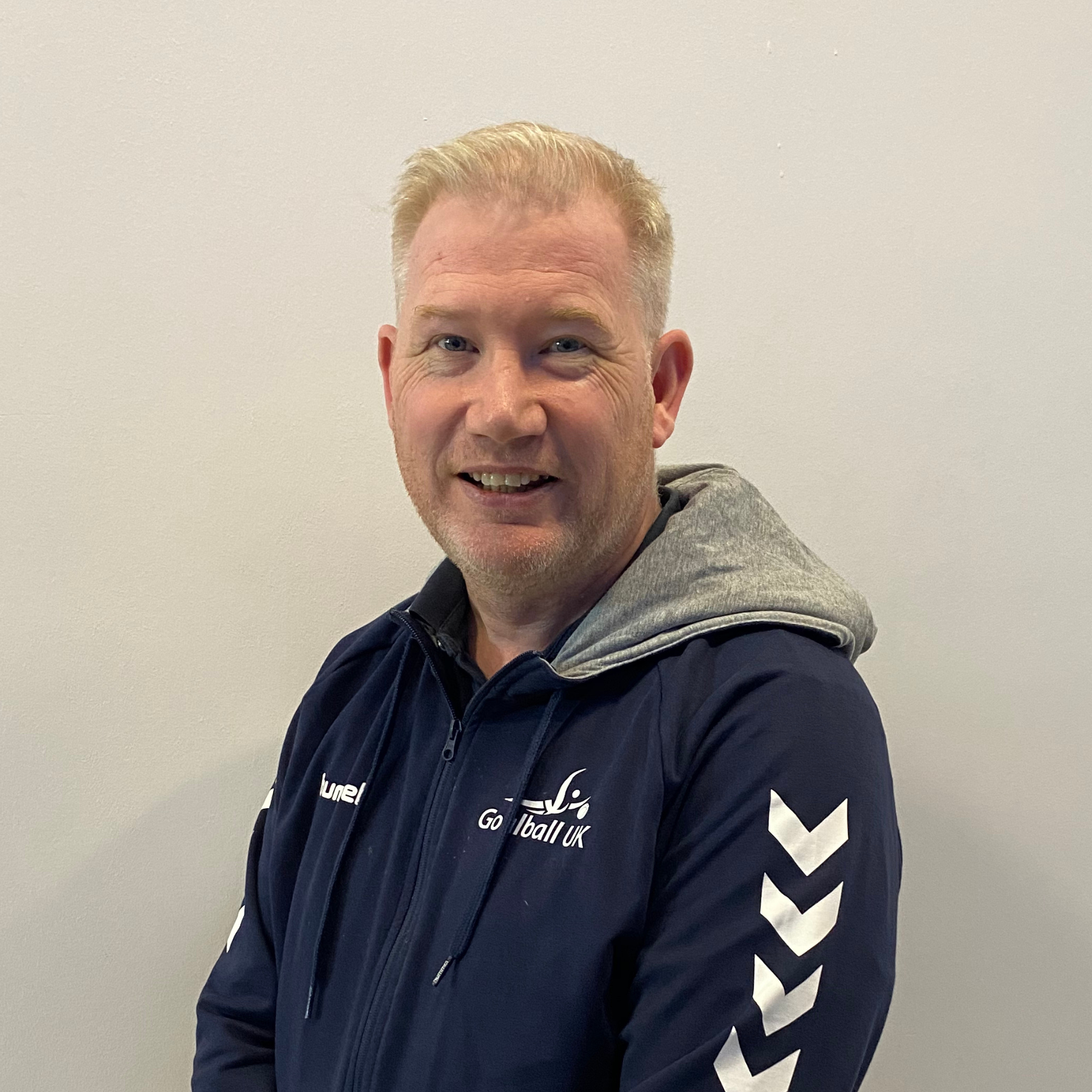 I am truly delighted to be the CEO of Goalball UK. It is a complete pleasure to lead such a talented group of people. A very wise person said,

‘Find a job you love and you don’t go to work anymore.’ I feel I have found this position. I have over 15 years’ experience in sports, charity and education management.

I have worked in schools, colleges, Higher education settings, local authorities and professional sports clubs in a variety of leadership roles.

My aim is to work with everyone in our sport to provide vision and leadership and ensure high quality services. I love providing individuals, groups and communities with the best environments to achieve their full potential. I am a lifelong sports enthusiast and I have played, coached and watched sports all my life. 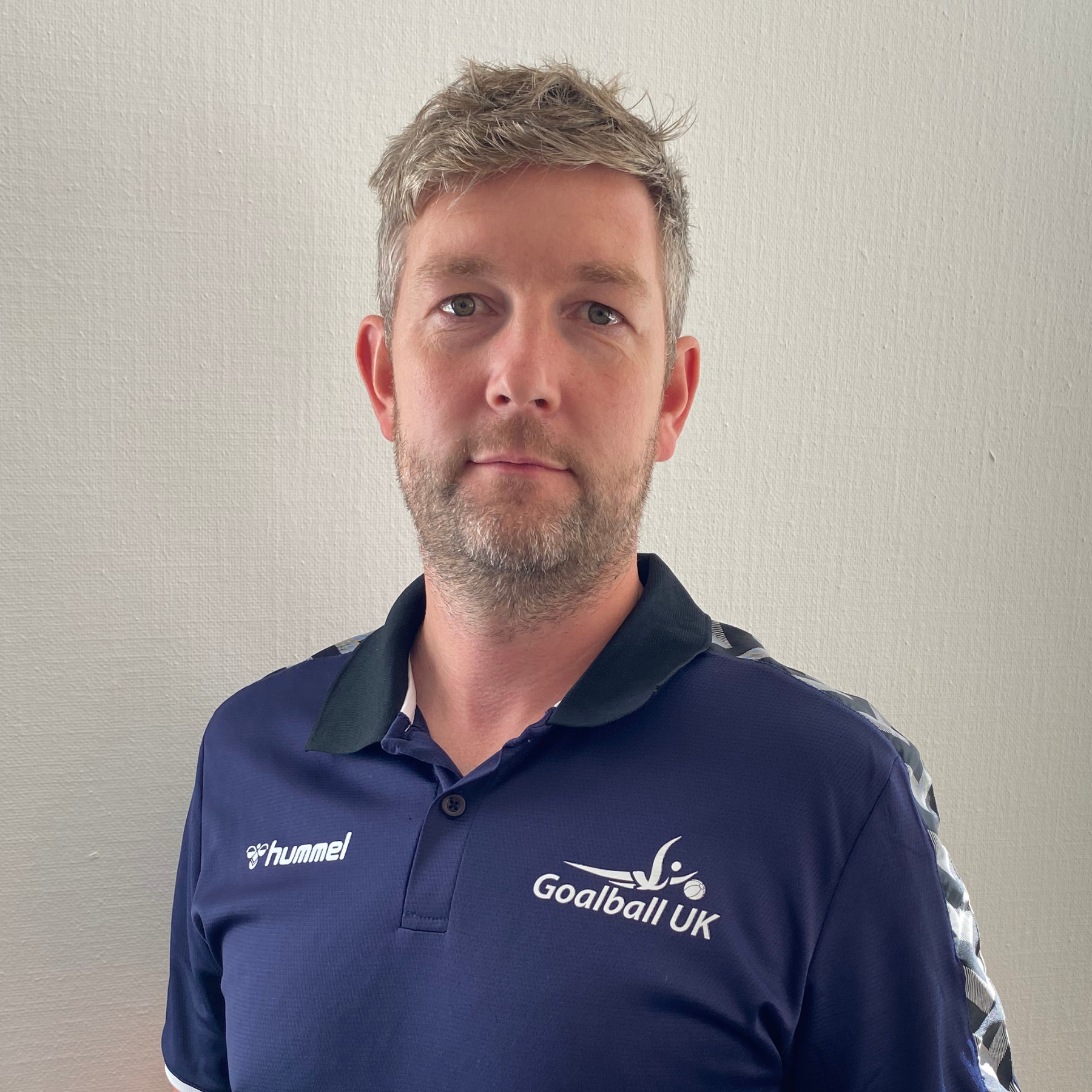 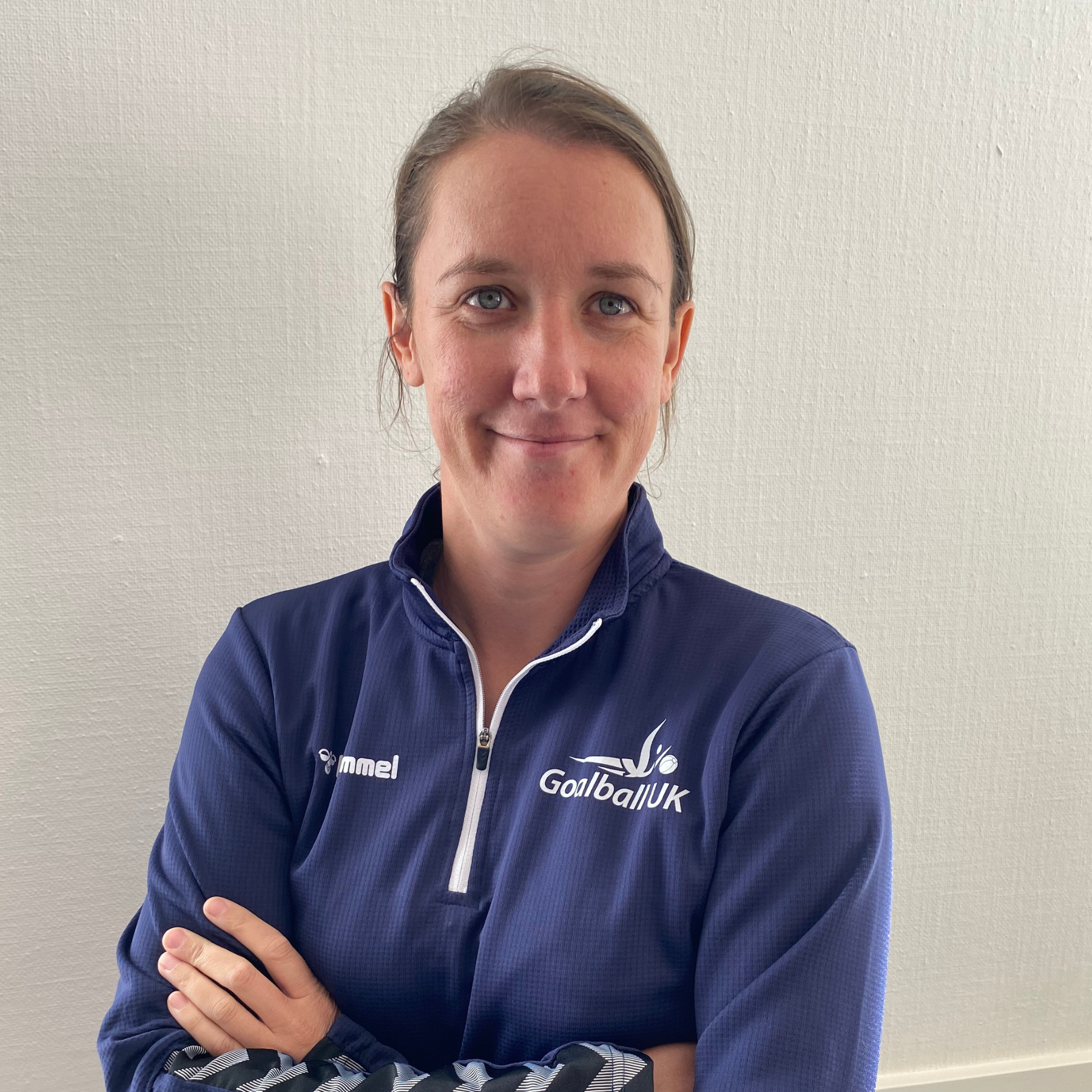 I joined Goalball UK in 2014 as the Talent Officer, progressing onto the role of National Talent Lead in 2018. Before this I spent many years working for My Sight Nottinghamshire and working in the sight loss sector. My first experience of goalball was at the 2010 IBSA World Championships in Sheffield, followed by an exciting visit to the 2012 Paralympic Games where I spent more time explaining the rules to people than actually watching. From then on I have loved the sport and grown passionate about ensuring this fantastic sport is recognised and appreciated by all.

Outside of goalball you can find me on a cricket field, walking my dog Oscar or renovating my house, which usually involves something being demolished! 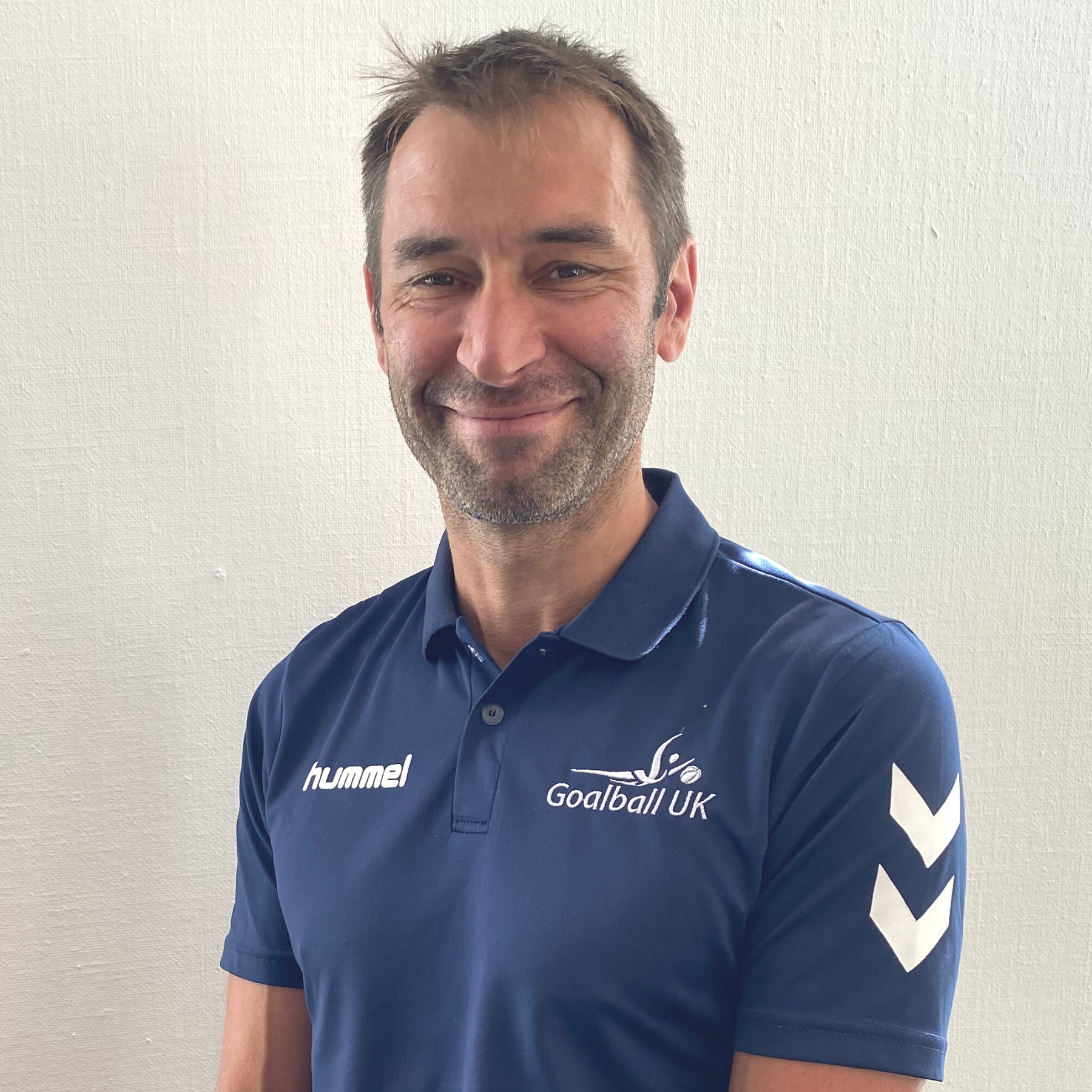 I joined Goalball UK in 2018, before Goalball UK, I worked in Higher education at both the University of Sheffield and Sheffield Hallam University as Club Sport Development officer.

Before entering Higher education I was swimming coach for 17 years. I coached all levels up to international. During my coaching career I lead teams with clubs (City of Sheffield and Middlesbrough & Hartlepool (my home town), and Country (GBR and England) to training camps and competitions around the world. I was also been part of the GBR swimming coaching staff at European Junior Championships, European Open Water Swimming, Queensland State Championships and the England coaching staff at the Commonwealth games in India.

Outside of work I enjoy (some say addicted to) running. I have competed in the London (3 times), Berlin, Chester, York, Amsterdam, Liverpool marathons as well as many 24 hours races, parkruns and local running leagues. 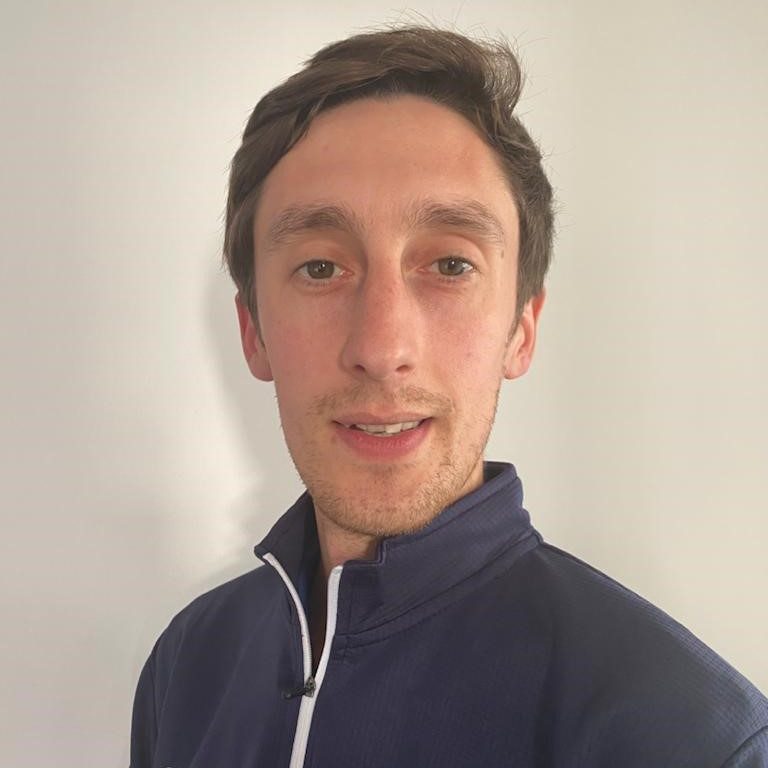 I’ve been involved with Goalball UK since 2011. Goalball has taken me to many different sports halls and given me so many great experiences. My favourite so far was being part of the goalball event team inside the Copper Box at London 2012.

I have a passion for coaching and currently work with London Elephants and Winchester Goalball clubs. I also have the privilege of being the assistant coach for the Great Britain men’s squad.

Outside of goalball I enjoy going to live sporting events, music festivals, visiting different countries and running. I’m about to embark on my first marathon….not sure if it’s a good idea yet! 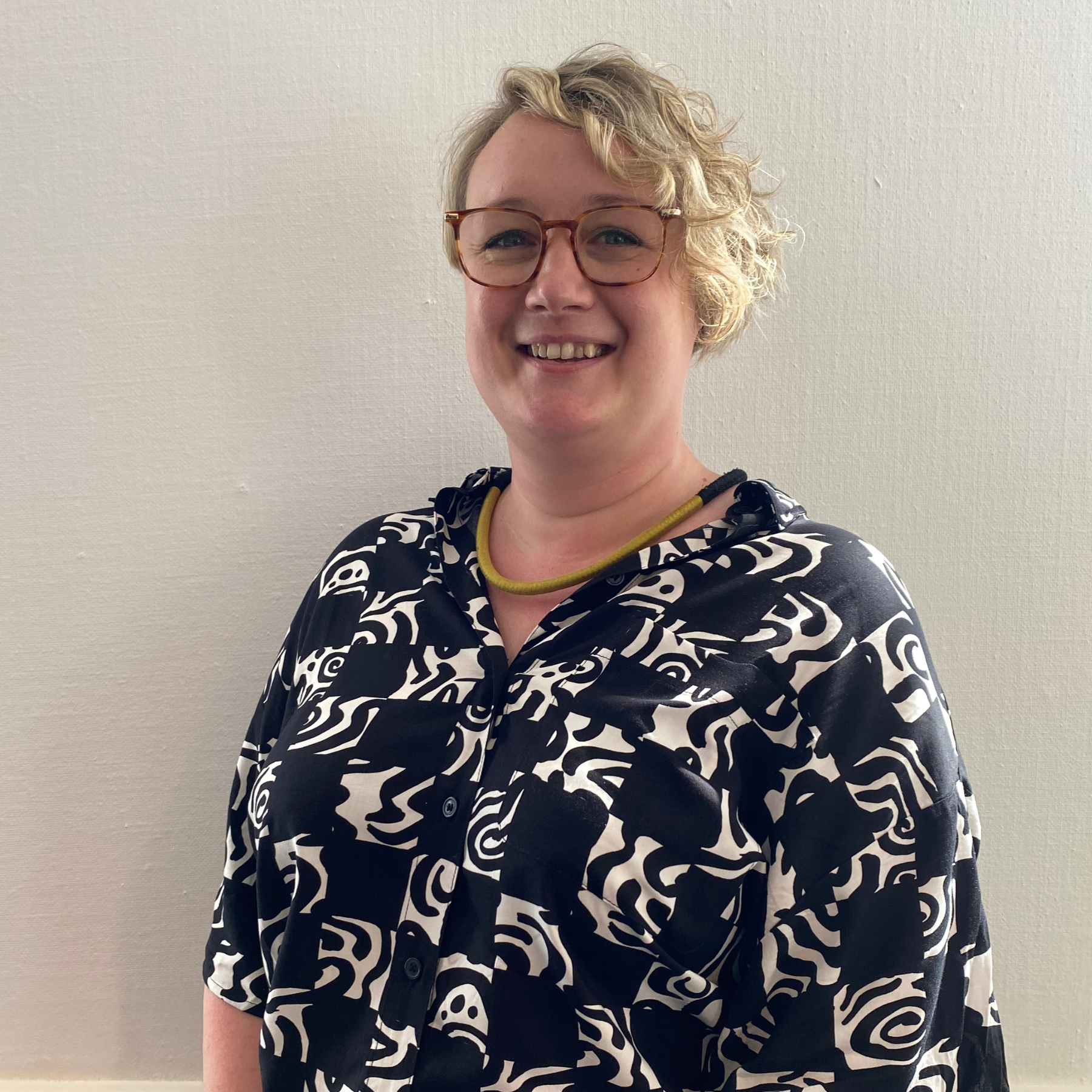 I joined Goalball UK at the start of August 2022. Before Goalball UK I worked in the Third Sector running a social enterprise as well as in education and a decade in ecommerce in the private sector. My career has spanned many sectors, but it’s always been about communication. I’m a bit of a nerd and love a spreadsheet, so my new role of Digital and Communications Lead is perfect!

I’m relatively new to working in sport professionally and goalball certainly caught my eye. I watched the National Finals in Sheffield at the EISS and was impressed by the sport at all levels.

Outside of Goalball UK, I played roller derby before injury forced retirement so now focus on fitness including weightlifting, swimming, tennis and hill walking. I’m still looking for a replacement for roller derby! I love music and festivals and hope to travel more now the world has opened up. 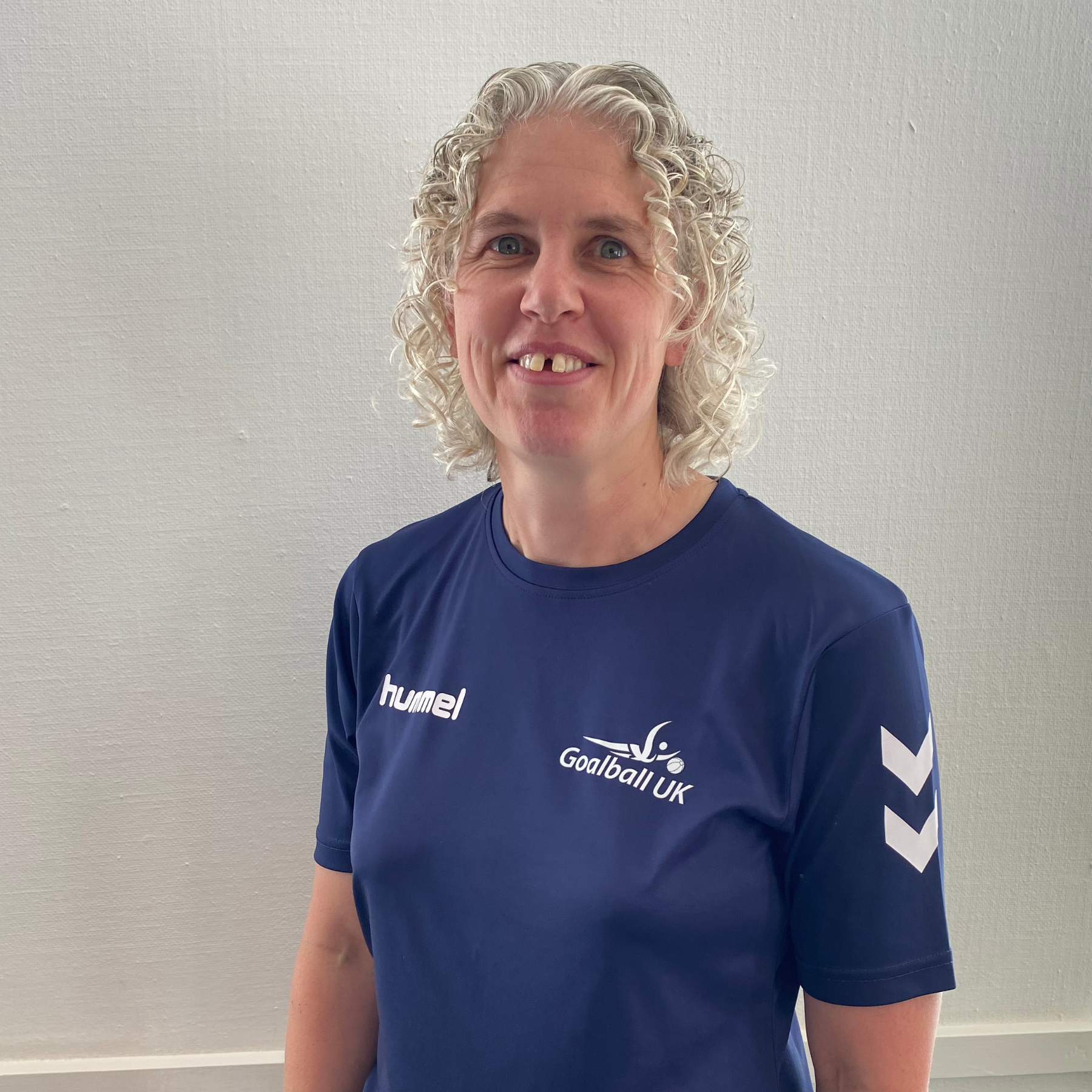 I have been actively involved in goalball since 2003 so pre-date Goalball UK! Previously I have worked at Leeds City College, Disability Sport Yorkshire and the RNIB.

I enjoy all sports but my favourite is definitely football. I am a massive Everton fan and as a season ticket holder go to all home games and as many away games as possible. In the past this has included European games in Spain, France and Germany – and hopefully there will be more in the future. Come on you blues! I played football competitively for 15 seasons for clubs in Yorkshire and Merseyside but I now just occasionally play for fun. I have also coached at a number of disability clubs.

When I stopped playing football I continued running to keep fit and started entering races, progressing from 5k’s to 10k’s to half marathons and eventually to marathons. As I also enjoy swimming and cycling, I then decided to give triathlon a go and instantly became addicted. Therefore, I now spend lots of time (and money!) taking part in events around the country. This often includes guiding blind and partially sighted athletes.

I’m not very good at sitting still so my holidays usually involve attending big sporting events around the world rather than just sun bathing on a beach! Consequently, I’ve been to numerous Olympic and Paralympic Games, Commonwealth Games and both Men’s and Women’s Football World Cups and European Championships.

I also enjoy listening to live music so regularly go to gigs with old friends from school, dancing around to bands from the 1990’s and reminiscing about our teenage years! 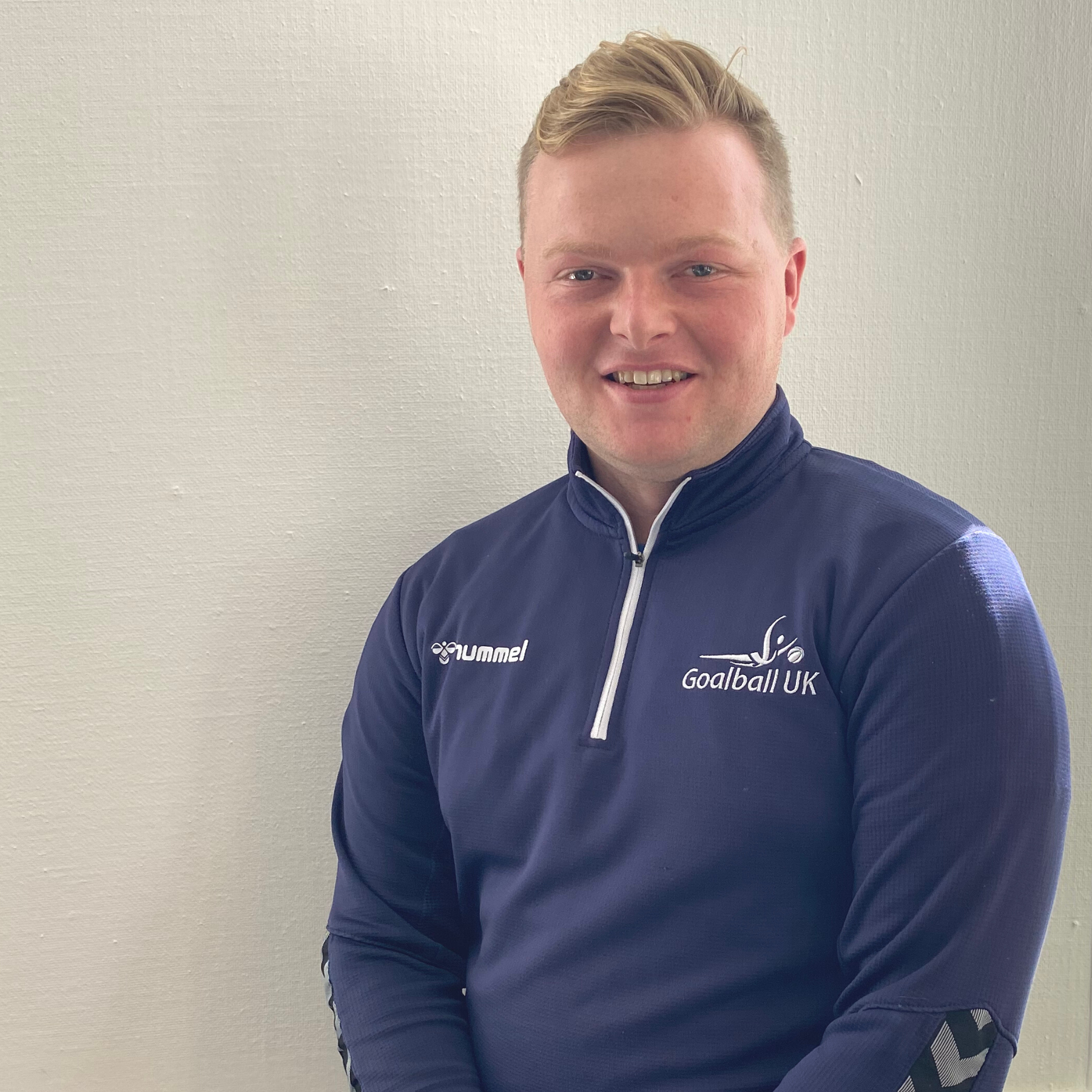 I joined Goalball UK back in June 2018, having worked within Major Sporting Events for a few years. This was something I did whilst studying Sports Coaching at Sheffield Hallam University from where I graduated in 2017. During my time in Major Sporting Events, I helped to deliver the British Transplant Games (2017 and 2018) along with Lacrosse World Championships (2017) and several Decathlon Sports Series events around the UK.

Outside of goalball, I enjoy watching Sheffield Wednesday FC where I have been a season ticket holder for 15 years. I also enjoy playing golf at Stocksbridge Golf Club and playing cricket for Stocksbridge Cricket club. When I get time to have a break from goalball, I enjoy heading overseas with golfing friends and playing new courses as well as spending time with friends and family wherever possible. 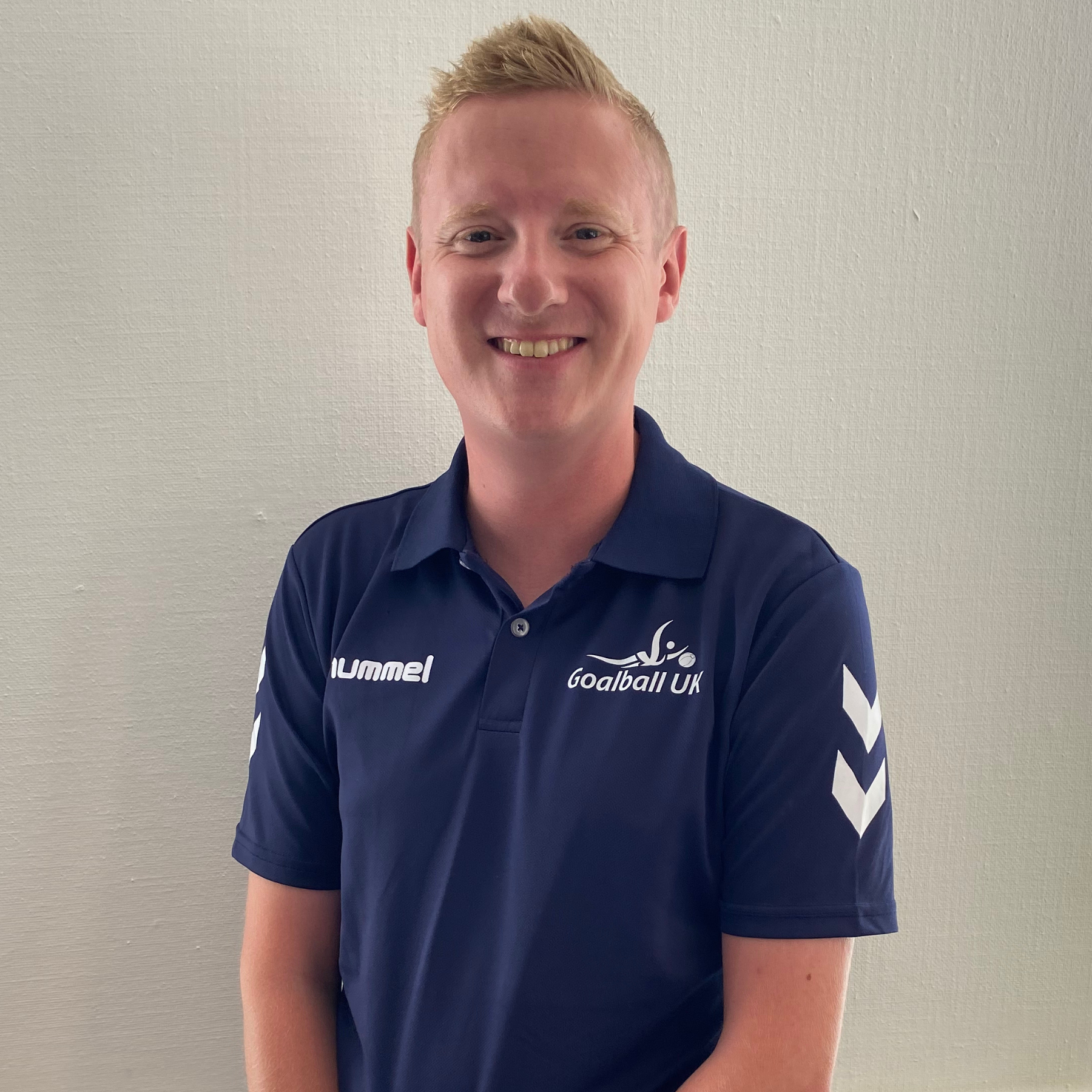 I joined Goalball UK in July 2018, having gained 5 years sports coaching experience in schools since graduating Sheffield Hallam University. Outside of goalball I like to keep active in various ways, including going for walks in and around Sheffield and The Peak District, playing various sports recreationally including local parkrun.

I enjoy travelling and visiting new places, with one of my intentions to visit many more parkruns, maybe even go to every ‘parkrun country’. A life goal of mine is to visit each continent at least once. So far, I have been to Asia, Oceania, and of course Europe!… still a long way to go! 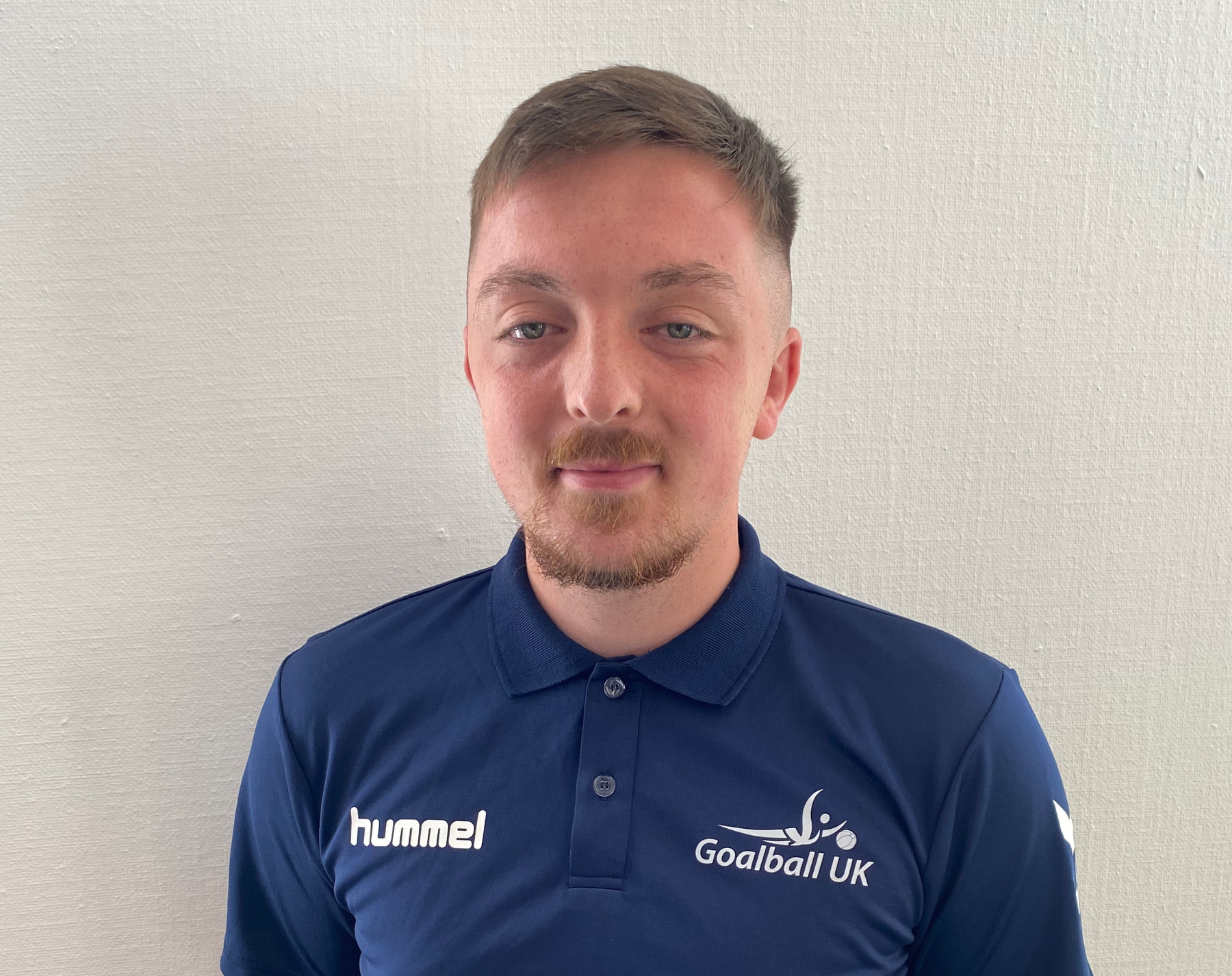 I joined Goalball UK as a full-time member of staff in September 2020, after volunteering with Goalball UK throughout my time studying Sports Development with Coaching at Sheffield Hallam University. I lead the #FindTheNext Goalball Academy, a programme devised to allow young talented goalball players to reach their full potential on and off the court. I also lead our marketing and social media output, ensuring the goalball family is up to date with what is happening in our world. Outside of goalball, I enjoy (is that the right word?) following Hull City A.F.C and Hull K.R.  R.L.F.C home and away. as well as playing sports myself, such as football, rugby, and goalball!
Like other staff members, I enjoy staying active through running and taking part in parkrun and longer distance running events. I hope to one day take part in the London Marathon as well as other high profile marathons abroad!

Having qualified as a Chartered Accountant, I have spent over 20 years in the private sector advising small and medium-sized businesses. I now work exclusively in the sporting and charity world and has advised several government-funded sports, but Goalball UK remains my longest-serving Board post, where I am also the Company Secretary.

I have been the principal adviser to the Government on how their money is being spent, and I help the Goalball UK Board of Directors understand where the sport’s finances are up to and irritates the Goalball  UK staff with his queries about expenses and invoices!

Aside from my wife Helen and children Leo and Holly, one of my main passion’s is Manchester United Football Club, where I am a season-ticket holder for over 30 years. Family life currently occupies a lot of my time, but when my wife allows me some of my favourite interests are travelling to different countries, reading a variety of books, watching films most people think are boring and catching up with his friends over real ales drunk by middle aged men.

Amongst his various roles, I believe that it’s the warmth, positivity and sense of enjoyment of the people in the world of goalball that make the sport stand out from the others and be a pleasure to be involved with.