Coach’s corner – the return of goalball! 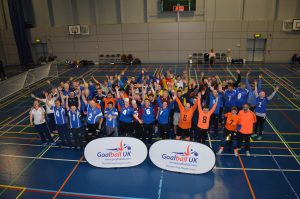 In October we play goalball…wearing pink is optional!

Over the past few months, the #GoalballFamily up and down the UK have worked tirelessly to return. Thankfully, this month the hard work for some has been repaid with four clubs getting back to training in October so far! These are:

Across these four clubs, over 100 people have been involved in goalball returning (players, coaches, officials, volunteers and committee members). What a month!

Each club took time out to speak to us about how their feelings regarding their session, as well as a “top tip” they would give to clubs who have not yet returned to play. First up is Warren Wilson of Cambridge Dons:

“Involve everyone in your club from the beginning”. Ever since the restrictions came into place earlier this year Cambridge Dons as well as many other clubs have found ways to stay connected, whether it be through quizzes or general virtual get togethers. Warren continued “We tried to keep everyone in our club connected on the progress we were making on returning to training. When the initial ‘Return to Play’ guidance came out we held Zoom meetings on what this means for us and our club. This continued on when any updates were made and in the run up for our first training session back”. 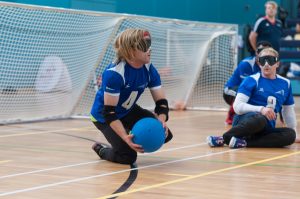 (Warren Wilson saving a shot and preparing to shoot).

The next top tip is from Croysutt Warriors, with Tom Britton and Robin Faulkner providing their advice from their experience. Tom said “Pre-plan, pre-plan, pre-plan! By taking the time to plan ahead of the session you will only make it easier for yourselves when you get to the sports hall”. Robin continued “if you are unsure, do a small-scale test run with only a few players and volunteers to understand how it will work out in a full session”. 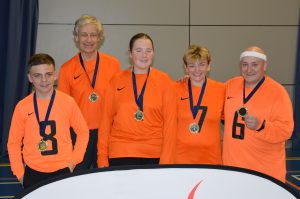 (A blast from the past with a team photo of Croysutt Warriors after a tournament in their former bright orange kit. Tom Britton is on the far right meanwhile Robin Faulkner is fourth from the right).

Moving swiftly to the perspective of Aaron Ford, GB Women’s Head Coach and Sports Academy teacher at the Royal National College for the Blind. He outlined the importance of planning to deliver your session as normal as possible once you are on court. “Ensure you diligently consider all safety and cleaning measures before hand. The better prepared you are the easier the session will be once you begin. Ask for help, lots of people have ideas and ways that they work within a sports hall so ask for advice and share ideas so that we can learn from each other, deliver best practice and keep everyone safe”. 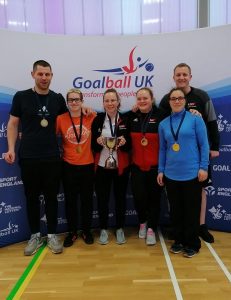 (An RNC team photo after the 2020 Intermediate Finals where RNC came away with gold with a mainly women’s team! Aaron Ford is at the far right at the back).

Finally, Adam Knott reiterated the vital point of everyone singing from the same hymn sheet. “Be really organised and make sure it is a team effort. Everyone has a part to play within your club in ensuring the sessions run smoothly and most importantly keep everyone safe. For example, we introduced a cleaning rota to allow as many people as possible to understand what is expected from them in this role”. 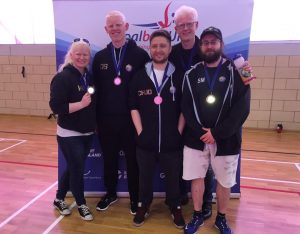 (Smiley team photo of Winchester Goalball Club post tournament with medals. Adam Knott is second from the right at the back).

It has been amazing to see everyone within the goalball family come together over the past few months and work hard to get back to training. Long may this continue!