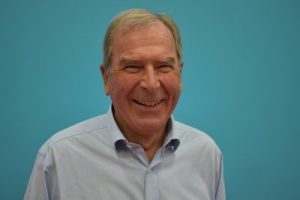 This week we caught up with John Grosvenor!

What is your role at Goalball UK

I am Chair of Goalball UK and I was appointed to this role in July 2018.

I was aware of goalball for a while because my nephew, Sam Hoskin, plays. He became aware of the sport at the London 2012 Paralympics and then became a regular player for Winchester. So, when the vacancy for Chair came up, I jumped at the chance and fortunately was offered the role.

Well, being of a certain age, my music tastes originate from the 1960s and 1970s. I am a big fan of David Bowie as he brought a lot of colour and life to the music scene in the 1970s which was not a great time generally. I listen a lot to an album that was released a couple of years before he passed away in 2016 called “The Next Day”. My favourite track is “Where are we now” which topped the iTunes download charts upon release. 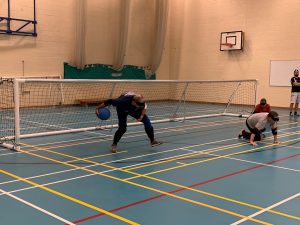 Do you have any superstitions or rituals?

I am a big Everton fan and every time I go to Goodison Park I have to buy a golden goal ticket from the same guy who stands outside the Everton shop. Also, as you will read later, I play golf and I like to use a ball with the number 8 on which was the number worn by Alan Ball who is my favourite Everton player of all time.

What is your favourite meal?

As far as I am concerned you can’t beat a good piece of red meat so I love a rare rib eye steak with a glass of red wine.

Which person do you admire the most and why?

This is easy! It has to be Nelson Mandela. He was an amazing human being and a great example to us all. There are some great quotes but the one that I keep in my mind is “It always seems impossible until it’s done”.

What are your hobbies?

Sport is my main passion in life, both watching and playing, which is one reason why I am delighted to be Chair of Goalball UK. As I mentioned above, I am a big Everton fan having been born in St Helens on Merseyside. I am a 3rd generation Everton fan and I am delighted that my 2 daughters have carried on as Everton fans. My main concern is that my two grandchildren live in Barcelona and their father is a big Barca fan so I have to keep buying them Everton shirts to remind them of their heritage! In my younger days I played a lot of cricket, hockey and tennis but nowadays my sporting activity is mainly golf although I also do a lot of swimming and cycling for exercise. Before the pandemic my wife and I used to go to watch a lot of live sporting events but now like everybody we have to make do with sport on the television and radio.

I am lucky enough to have travelled to a lot of countries round the world for both work and pleasure but the place that is on my bucket list is Machu Picchu in Peru, South America which is regarded as one of the new seven wonders of the world.