Digging through the Archives – Dina Murdie! 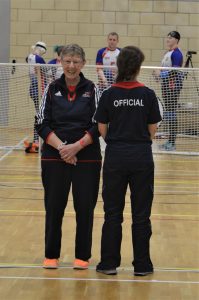 Today, in celebration of her birthday, we are putting the spotlight on the one and only Dina Murdie.

Everybody in goalball, not just in the UK but around the world, knows Dina as she has been instrumental in the development and delivery of the sport for almost 40 years.

Two years ago, in the 2018 New Year Honours list, it was announced that she would be deservedly receiving a British Empire Medal (BEM) for service to sport for visually impaired people. The multitude of congratulatory messages, posted by the #GoalballFamily on social media, demonstrated just how much of an impact she has had on so many people over the years.

Dina was officially presented with her medal by the Lord Lieutenant of Worcestershire at a formal ceremony at the Guildhall in Worcester in April 2018. In attendance were family and friends, including some of the Goalball UK staff team.

Dina was subsequently invited to attend a garden party at Buckingham Palace in May 2018 together with other recipients. Becky Ashworth went along as her guest and they thoroughly enjoyed their afternoon tea – which was a little bit different to the tournament ‘meal deal’ they are used to!

The BEM wasn’t the first award, and no doubt won’t be the last award, that Dina has received to acknowledge her commitment to goalball. For example, in March 2017, she was presented with a Torch Trophy Trust award by Prince Edward (HRH Earl of Wessex) at the British Olympic Association in London. 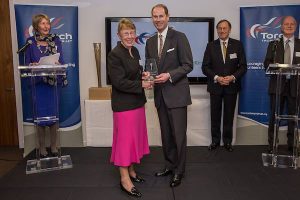 Although there hasn’t been much actual goalball activity this year, Dina has continued to generously volunteer her time and effort. As well as chairing the Goalball UK Competition Committee (CC) she embarked on an amazing 2.6 Challenge to raise much needed funds for Goalball UK by rowing 26 minutes every day for 26 days. She also contributed to our advent calendar with a hilarious joke!

So, Happy Birthday Dina, and thank you for your ongoing support!