Digging through the Archives – Junior Events 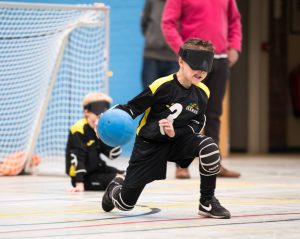 This week we are looking back at Junior Events!

As last Friday was Children in Need day; and we announced details of our exciting new #FindTheNext Goalball Academy (please contact alex.cockerham@goalballuk.com for more info!); and Stephen Newey (our Children and Young People Officer) was back delivering school sessions, we felt it was appropriate this week to look back at some of our previous junior events.

We begin with the 2017 End of Season tournament at the EIS in Sheffield where, as well as the usual Novice, Intermediate and Elite level competitions, there was also a specific Junior development session. This was led by GB Men’s coach Faye Dale with GB Men’s player Dan Roper also present to offer his ‘top tips’. Eleven young people, aged between 7 and 12, took part – firstly in a skills and drills session and then some friendly games. Many have since gone on to play competitively in the Goalball UK National League. 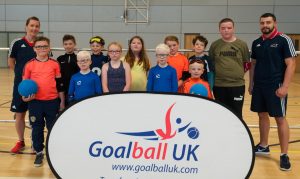 Following this, in October 2017, then was then a Junior development day (for young people aged between 8 and 16) at The Factory in Birmingham. This session was led by GB Women’s Assistant coach, Becky Ashworth, with support from GB Men’s player Caleb Nanevie. Both Stuart Hudson and Meme Robertson attended who are now, respectively, established members of the GB Men’s and Women’s squads!

Before they got to play any goalball, all the players had to help lay the court and put up the goals. The harsh reality of any goalball session! They then did some icebreaker games to get to know each other. Caleb then led them through a GB style warm up followed by some attacking and defending techniques and tactics. In the afternoon, they were divided up in to teams and played a round robin tournament with ‘The Goalsterzzzz’ being crowned champions! 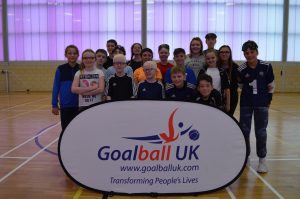 It is not just Goalball UK who have organised junior events though. Clubs have got involved too. For example, in March 2018, Cambridge Dons Juniors travelled over to Norwich to play Norfolk Hares. The players received expert coaching advice from Warren Wilson and Sarah Leiter whilst the parents got to chat which each other over a cup of tea and a biscuit. After the session, everyone then sat down to share pizza together – a perfect end to any session, whatever your age! 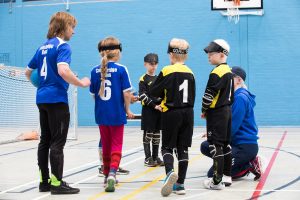 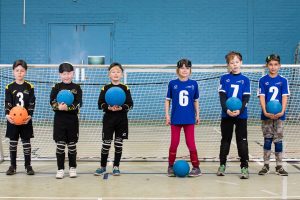 A couple of months later, in May 2018, the inaugural London Cup took place with Croysutt Warriors, Morpeth School and Winchester battling it out in the Junior section.

It is great to see the number of junior players increasing at clubs and tournaments. Goalball UK are hard at work planning more junior events to engage and develop younger players so stay tuned to our website and social media in the coming months for some exciting announcements!