Digging through the Archives – The Worshipful Company of Spectacle Makers

This week we are revisiting the start of our fantastic partnership with The Worshipful Company of Spectacle Makers.

Founded in 1629, they are a livery company in the City of London who support others through charitable giving and networking opportunities. They are a diverse and international organisation, the oldest optical body in the world, whose overall mission is “to support better vision for all” with “improving access to sports, leisure and culture for vision impaired people” one of their six stated aims.

Goalball UK were extremely grateful to be awarded a substantial 3-year grant from The Spectacle Makers’ Charity (in June 2018) to specifically help goalball develop in London and raise awareness of the sport nationwide. We welcomed some trustees of the charity to the EIS in Sheffield (in September 2018), as part of a wider Investors in Customers event, to learn more about the work of the National Governing Body and see the sport in action courtesy of the GB Men’s squad. Through the support of The Spectacle Makers’ Charity, Croysutt Warriors and London Elephants came together to form an elite team. They entered their first Elite Tournament in February 2019, finishing in 6th place. 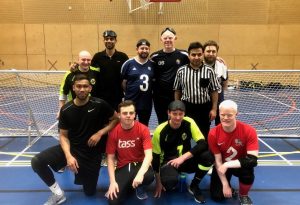 From then on, the partnership has continued to grow. Mark Winder (Goalball UK CEO) and John Grosvenor (Goalball UK Chair) attended a grand ‘Court Luncheon’ (in December 2018). Mark was also honoured to be named as a Freeman (in February 2019).

Additionally, there have been visits from The Worshipful Company of Spectacle Makers members to a London Elephants training session and also the Goalball London Cup (in June 2019) to see how the funding is being put to good use. 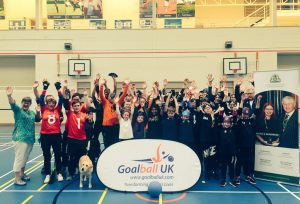 COVID-19 has obviously halted all direct delivery work, not just in London but everywhere this year. However, development work continues behind the scenes and there will hopefully be some new goalball activity in London as soon as it is possible.

Despite the pandemic in September 2020, The Worshipful Company of Spectacle Makers rebranded its charity element to The Spectacle Makers’ Charity. Below is their new logo and follow this link to their website which provides more information on the support they provide to a wide range of visual impairment charities.

Finally, follow this link to a video delivered by our CEO Mark Winder earlier this year on the support The Worshipful Company of Spectacle Makers have provided to Goalball UK.

We look forward to a continued successful partnership in the years ahead.