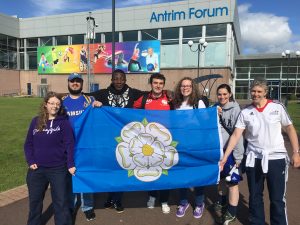 In July 2017, Goalball UK staff members Kathryn Fielding and Faye Dale together with a group of Yorkshire based experienced players flew over to Antrim in Northern Ireland for a ‘Goalball Roadshow’

The event was organised in partnership with Disability Sport Northern Ireland (DSNI) and anyone interested in learning more about goalball was invited to attend.

There was then a demonstration game, by the experienced players, to introduce some of the tactics and rules before a combined game when the new and experienced players played together. The event then concluded with a Q&A session.

It was a fantastic day, with similar successful events taking place in 2018 and 2019, that have helped the development of goalball in Northern Ireland.

Check out the video below which showcases some of the activities and speaks to some of the people who were involved.