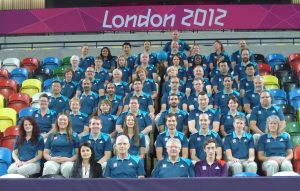 In September 2011, a refereeing course was held at York St John University. The five rookie refs were Goalball UK staff member Alex Bunney plus Christine Wilkinson, Hannah Webber, Judith Oakley, and Robert Avery who had all got involved in goalball as a consequence of the 2010 World Championships that were held in Sheffield.

Also in attendance were a number of players, as refereeing courses are designed to test both knowledge and application of the rules. Therefore, players are required to simulate game situations. Often this involves them purposely breaking the rules, which is always of great amusement to those taking part! 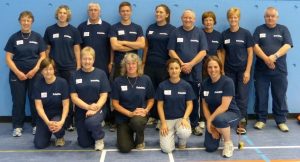 One of the mischievous players that day was Ellie Mackin, who wrote the following poem – entitled Training Referees – to capture the events of the day:

We all arrive at York, in the University hall,

to test out some new people, who want to referee goalball.

We’ve planned out our tactics, we know what we must do,

we have to break the rules, to see what these people knew.

illegal defence, noise, own goals, all to put them through their paces.

Two teams of five to play five games, a tiring day but one made fun,

by the fact that we had to do, what is not normally done.

We rotated our positions, we all tried some different shots,

most of all, our biggest task, was to try and make sure lots

of penalties were given. Some saved, some scored and some declined,

all as part of our attempt, for us to try and find,

new officials for our games, who reach the standard of the rest,

and from what I saw today, I think that we had some success!

Since 2011, Alex, Judith and Robert have gone on to referee at international tournaments as well as regularly at domestic tournaments alongside Hannah and Christine. Robert was selected for the 2017 IBSA European A Championships in Finland and had the honour of refereeing the men’s final between Lithuania and Germany. He was also selected for the Tokyo 2020 Paralympics, which has now been postponed until next year. 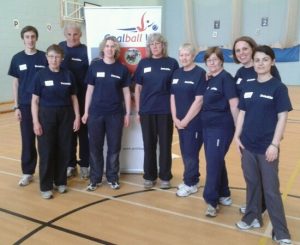 Goalball UK tournaments can’t happen without referees, so if you think you have what it takes, or know someone that might, head over to our volunteering and officiating page to learn more and to register your interest via the following link Goalball UK – Volunteering. You could subsequently find yourself officiating at the Paris 2024 or Los Angeles 2028 Paralympics!

Next month Robert Avery will be the focus of our 10-year stories, detailing his journey to becoming an internationally renowned goalball referee. For more 10-year stories please use the following link Goalball UK – 10-year stories.