Each Thursday we want to put the spotlight on a person involved with goalball – from players, officials, coaches, or anyone.

This week we caught up with Frin Lewis-Smith!

What is your role at Goalball UK/within the goalball world?

I’m a level 1 IBSA referee and have blown the whistle at tournaments since 2014.

At the 2012 Paralympics, I attended 2 sessions of goalball – a group round and the men’s semi-finals. I was fascinated both by the game and the role of the referees – it was clear that it mattered which of the 2 refs makes which call, but I didn’t quite figure it out before the tournament ended. A few weeks later my husband – Dyfrig Lewis-Smith – joined the Cambridge Dons and became part of their Novice team. I helped at club sessions and was ‘up for it’ the next time Goalball UK recruited officials. 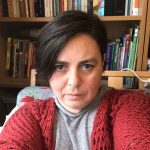 Is there a particular song, artist, or genre that you listen to before a tournament to get in the mood? Or anything you’re loving at the moment?

My playlist is very cheesy and weird. Often I’m listening to the Hamilton Soundtrack, or a Beatles Album as I arrive at a tournament, but my playlist also includes 101 Wurlitzer Favourites and lots of cheesy cover songs.

I don’t have any superstitions or rituals, but I make a habit to review a few sections of the rules before every tournament. I go over things which are rare, or which got the officials thinking about a previous tournament, and for days that end with a ranking, the rules for extra throws.

A plate of vegetarian curries with rice as I tell my other half about the day’s play is a great way to round off a day.

Warren Wilson, at the Cambridge Dons, whose passion for goalball has brought so many people into the sport for the first time.

I play board games and computer games, mostly strategy games like Civilisation VI, but currently the cooperative game Gloomhaven. My ideal Saturday when not at a goalball tournament would be gathered around a table with friends, rolling dice and weighing up strategies for board domination. To put it another way, one way or another my weekend involves a rule book. I’m also a Christian. It’s not a hobby, but a passion that shapes my whole life. I work as a hospital Chaplain and am involved in several local churches.

I want to visit Japan, travel by train, and explore the cities and a bit of the countryside. I once flew back from South Korea next to a woman from Japan. She pulled out her phone to show me pictures of the snow and the Cherry blossom in her district – I’ll get there one day, I hope.