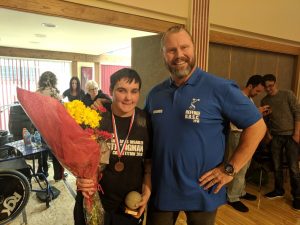 This week we caught up with Reanne Racktoo!

I play at Intermediate level for Blackburn.

I first played in PE lessons when I was at school (at St Vincent’s in Liverpool) and then when I went to study at RNC I started playing in tournaments. My first tournament was in Birmingham in October 2016, and I was the top female goal scorer!

Is there a particular song, artist, or genre that you listen to before a tournament to get in the mood? Or anything you are loving now?

I like rock music – songs like ‘Highway to Hell’ by AC/DC and ‘Sweet child o’mine’ by Guns N’ Roses.

I usually put my right shoe on before my left shoe but, other than that, nothing significant. 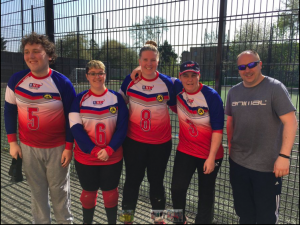 It has got to be a McDonalds! A 20-nugget share box (with my brother) and some fries.

Mohammed Salim Patel (aka Sal). I first met him at school, but I now play with him at Blackburn. He is really supportive both on and off the court. He always ‘checks in’ with you to see if you are doing OK. 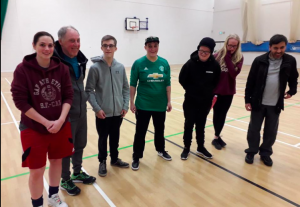 I like football – I support Manchester United – and I played for England at the 1st ever IBSA Women’s Blind Football tournament in Austria in 2017. I used to do a lot of climbing. I first tried it when I was at school and competed for the GB Para climbing team at the World Championships in France as well as numerous other competitions. I also entered Britain’s Disabled Strongman Competition in 2018 and came 2nd. Now I am thinking about getting a bike, but I have not cycled for a long time, so my mum is worried that I will fall off! Away from sport, I like playing computer games, especially racing games – I have a racing steering wheel. I would love to have a go at one of the Speed of Sight Driving Days and have a go, for real, at driving. They have got some brilliant, modified buggies. 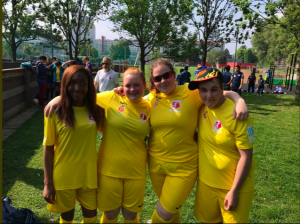 I have been skiing in Italy before and have recently been learning how to snowboard so would like to go somewhere when I can. Japan maybe?