Watch out Super European Goalball League, the Tigers are coming!

Fen Tigers are in Vilnius, Lithuania to compete in Stage 1 of the Super European Goalball League (SEGL) from 17th-20th February 2022. The SEGL is an international club based goalball competition with 13 teams from 11 countries, split into 2 geographical divisions, with all teams fighting to qualify for the final round in Rostock, Germany and ultimately being crowned 2022 SEGL Champions! 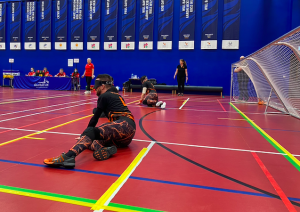 This will be the first year Fen Tigers have competed in the SEGL, and indeed the first club from the UK to do so, meaning without even stepping onto court in Vilnius, history has been made! The opportunity has been a long time coming for the Tigers, with them originally a part of the 2021 SEGL lineup, which was cancelled due to Covid restrictions across Europe at the time. We spoke to Fen Tigers coach Emma Evans about the exciting prospect of competing against goalball’s European elite and the team’s aspirations for Stage 1:
“As a club, we have competed at the high intermediate/elite level at Malmo for a few years and were keen to allow the top elite team to compete internationally. For the club, taking part in SEGL is about 3 main things:

Stage 1 is about consolidating as a team on court as we already know we have this locked down off court. It’s about learning from the best clubs in Europe and seeing what we can bring back to the UK to help us in future domestic competitions. Our ultimate goal for this season would be to finish the Northern league in the top 4 and qualify for the Finals in Germany in October, but we’ll take it one game at a time. We are under no illusions, as we know it’s going to be tough but we’re definitely up for the challenge”.

The target is locked in for Stage 1! Who will be playing for Fen Tigers in their inaugural SEGL campaign? A squad of 5 will do so, including:

“Everyone is very excited and super-charged for Stage 1, we are so pleased to have Dave Scott as an honorary Tiger during SEGL. He is a long-standing friend of the Tigers and adds a lot to the team both on and off-court. Having Josh McEntee’s solid defence will also add extra breadth (and much-needed height!) to the team. For Dom, it will be the first time he has played internationally at an elite level and it will be a proud moment to see the 3 Roper brothers on an international court at the same time”.

As well as an incredible experience for Joe, Dom, Dan, Josh, and David, it will be an incredible learning curve for coaches Emma Evans & Daniel Beddis. The destination is always worthwhile arriving at when the journey has had challenges, which Emma continues to expand on:

“We were due to compete in 2021 but Covid prevented us from attending. Even before that, the journey to get to SEGL does seem to have been a long one. We had discussed the possibility for several years, but it never materialised for several reasons including Covid and the cost. There was also a strict criterion against which you can be accepted to play in SEGL, including your placing in your national league. We do though know that the SEGL organisers are delighted to have the first UK club in the league, and they have been very supportive in helping us get ourselves organised.

To follow Fen Tigers throughout Stage 1 of the SEGL, check out all results via the SEGL Facebook page, with their first fixture against Ha. Vi. 2 Bruxells at 10:15 am GMT on Friday 18th February!! Following that contest, the rest of the Tigers fixtures include:

Live Broadcast: All 21 matches of Stage 1 will be live-streamed via YouTube!

To find out more about the SEGL, head to the official SEGL website!