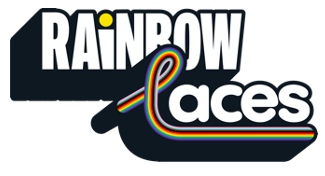 Rainbow Laces, a Stonewall campaign revolved around raising awareness of the barriers people still face in the world of sport and physical activity. Keira and Eilidh of the #FindTheNext Goalball Academy #LacedUp & #SpokeUp on how we can take steps to #MakeSportEveryonesGame!

So Keira and Eilidh, how can we make sport and fitness more inclusive for LGBTQ+ people?

Keira – Make sports teams inclusive for all genders, particularly for trans and non-binary players at an international level.

Eilidh – By making more people aware and by ensuring we create a welcoming atmosphere at all training sessions / competitions / classes etc.

Do you think people perform better when they can be themselves?

Keira – I think people do perform better when they are themselves, because then people don’t have to think about changing themselves, they can just play the game.

Eilidh – Yes, most definitely, as they will be more relaxed instead of having to pretend, they are someone else, which would be exhausting.

What do you both think we can do to support LGBTQ+ people to not give up on their sporting dreams?

Keira – You can be a good and understanding friend to them, which will help them want to keep playing sport and goalball.

Eilidh – By encouraging them to continue and show that they are valued and welcome.

Would you both challenge someone saying hateful towards LGBTQ+ people?

Keira – I would definitely challenge them; I wouldn’t make more conflict, but I would tell them it was wrong.

Eilidh – Yes of course, why wouldn’t I?

What does Rainbow Laces mean to you?

Keira – It’s good that people are visibly showing their support!

Eilidh – It is a campaign to show solidarity and inclusiveness towards all in the LGBTQ+ community.

Thank you Keira and Eilidh for #LacingUp & #SpeakingUp to raise awareness for the LGBTQ+ community. We will be speaking to more of the #FindTheNext Goalball Academy team during the campaign, watch this space!