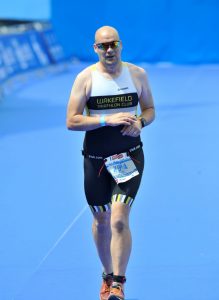 This month we chatted with Phil Green, whose goalball journey inspired him to make some radical changes in his life and presented many new sporting opportunities.

Phil Green was affectionately known as ‘Phil Cricket’ as he was always found playing for his local VI cricket club in Yorkshire. Although, the larger than life character confessed that sometimes his favourite part of the sport was getting into the clubhouse after a match and enjoying a few beers with his teammates.

“I still love playing cricket, but often I was more interested in the social aspect of the sport and that was starting to have an impact on my health. I was drinking too much and always had a cigarette in my mouth. During that period, my main source of activity was playing cricket, which can often be a bit slow, and I wasn’t really pushing myself.

“A friend of mine suggested that we head over to Leeds to check out the local goalball club. My first reaction was that I thought the sport was a bit silly and that it would be too easy. But after some convincing I agreed to give it a go.

“I don’t want to say that I was a natural, but my first shot did go in! That was a real buzz and from that point, I was hooked. However, I certainly underestimated goalball as I would eventually learn just how demanding it can be. 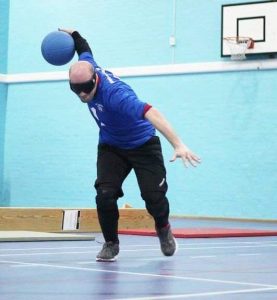 Over the next couple of years, Phil started to rise through the ranks and built up a reputation in the Goalball UK National League, becoming one of the best players at the Elite level. Due to his size and power, he developed a formidable shot that even many seasoned goalballers wouldn’t want to be on the receiving end of. At the end of 2012, Phil’s talent was spotted by the Great Britain team and he was asked to attend their training sessions.

“When I first got involved with Great Britain, I thought to myself that these guys were colossal! The team included the likes of Adam Knott at the time, people who had been around this set-up for a few years, and they were throwing absolute rockets. To be honest, I was feeling a bit out of my depth. However, Kathryn Fielding and Faye Dale inspired me to give it my best. I started to improve and became part of the team. 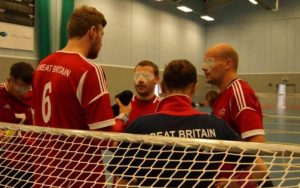 Being involved with the Great Britain squad, as well as a top Elite player, brought other, more unofficial, responsibilities that Phil relished.

“When you’re involved at the highest level of goalball, the younger players and those new to the sport look up to you, which is something that I love. At every opportunity, I would always work with them to share tips and help improve their game. It wasn’t just me who did this, it was so prevalent throughout the goalball community.

“Especially those that had just begun playing, I would always make the point that it’s not about winning or losing, at this stage they should just have fun, embrace the sport and make friends – the competitive stuff will come later on. Goalball is so key to the confidence to many young visually impaired people. We want everyone coming for the first time to feel welcome and go away with a great experience.” 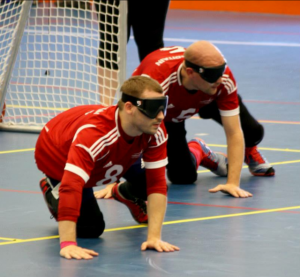 However, the physical demanding nature of goalball started to take its toll on Phil. He decided to take a break from playing the sport and focus on coaching.

“I was in the best shape of my life, but the all the diving around and taking big hits from the heavy ball was really battering and bruising me. My body was struggling and for a short while I fell out of love with the sport and needed a bit of time away. I still wanted to keep active and not undo all the hard work I had put in to get healthy. So, I spoke with Kathryn and she suggested that I take part in my local parkrun. This ignited what is now another passion in my life – running.

“It didn’t take long for me to catch the running bug. I loved that there was no pressure involved with these 5k runs. I could go at my own pace – either taking it steady or pushing myself. Over time I naturally started to get faster and faster and decided to look at other events I could take part in.

“I have now done many 10k runs, half marathons, triathlons and I have also completed the York Marathon three times. My next goal is to complete a half Iron Man in 2021. I definitely blame Kathryn for this obsession! I would love for more goalballers to join me on a parkrun.”

Phil has since returned to goalball and rediscovered his passion for the sport. He now plays for Phoenix Blaze (at Elite level) and West Yorkshire (at Intermediate level) as well as helping to coach at training sessions and tournaments.