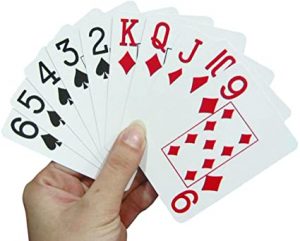 To keep up some ‘friendly’ competition between clubs whilst we are off the goalball court we have started a ‘Higher or Lower’ League.

A representative from each club is randomly selected to take part in each round and subsequently receive a phone call from a Goalball UK member of staff.

Using a pack of playing cards, the rules were simple, how many correct answers (Higher or Lower) could they give in a row? – there was an improvement from Round 1, with no club scoring zero!

In Round 2 Merseyside Sharks stormed to the top with the highest score from either round thanks to Ada Eravama scoring a sensational 28, there may have been an element of beginners luck as Ada stated before her attempt that she did not know the rules! In a distant second place despite her impressive score is Tracey Compton from the London Elephants with a score of 16, which would have seen her take the top spot in Round 1… unlucky! Finishing off the top three is Marc Powell from Fen Tigers with a respectable score of 11.

The full results for Round 2 are as follows:

To check out the results from Round 1 CLICK HERE