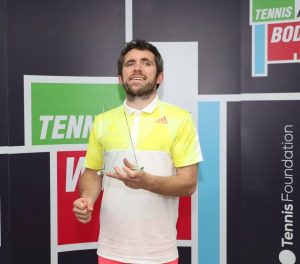 Today, we are featuring Roy Turnham from Merseyside Goalball Club:

I first experienced goalball nearly 20 years ago. My brother and sister were both also visually impaired, and as we all loved sport growing up, this led to us making a goalball team. We called ourselves the ‘Turnhamators’ and it was great fun to play the sport with them both!

Fast forward 15 years and I was doing the Goalball Club Leaders course. Matt Cliff, my best friend, and I had set up SAVI Northwest and were introducing goalball to the club. It received a lot of interest and two years ago we decided we had enough players to enter teams into both the Novice and Intermediate leagues.

It was great to attend these tournaments and share our experiences with so many other goalball players. The atmosphere is amazing, with the players, spectators and everyone at Goalball UK having so much passion and enthusiasm towards goalball – it is truly contagious.

We have received lots of support from Goalball UK in the formation of Merseyside Goalball Club – having a dedicated National Governing Body has been really helpful. With me currently residing in Hull, I have been commuting and still playing for Merseyside. However, I am hoping to start another goalball club in Hull soon!

I would say my favourite moment so far has been Merseyside’s first ever win. We were down 5-2 in the second half but managed to come back and win 6-5, it was amazing! Competing alongside, and sharing that experience, with some of my closest friends was really special.

I grew up playing a variety of sports meaning I developed a pretty wide range of transferrable skills. Being from a massive footballing city in Liverpool, football was a sport I played from a very young age. I enjoyed running with the ball and competing against my brother.

At the time, however, there were minimal opportunities for VI football so I took up athletics instead. I did this from my late teens until my early twenties. I then learnt about the formation of a blind football league in which Everton had joined and so I thought I would get involved.

I enjoyed being able to test myself against VI players other than my brother. My football was helped by my speed and posture from athletics so I was soon picked up by the GB team.

I played in the London 2012 Paralympics which was a fantastic experience. There were some great games. From there I have gone on to achieve over 100 caps for my country – something I am immensely proud of! 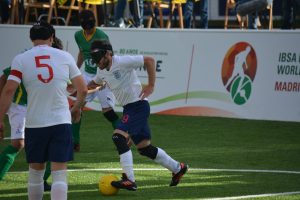 During my footballing career, I have had many great moments but one of the best would definitely be scoring my first international goal. This was against Japan in 2015. To make it even more special, my parents were there watching. They did so much for me growing up, providing me with lots of opportunities to try new things, play a variety of sports and experience so much, that for them to witness it was amazing.

It was around this time that I started playing VI tennis on a regular basis. Up until then I had just played casually whilst coaching.

The sport was only introduced to the UK around 2011. I was added to a mailing list which was talking about the opportunity to play it. So, as a sporty person, I naturally followed up and asked for more details. They sent over an information pack with the rules in and it looked great.

Our ethos at SAVI Northwest is to give VI people as much variety of sports as possible. We therefore applied for some funding from the Dan Maskell Trust to introduce VI tennis. However, we couldn’t coach VI tennis without first learning ourselves! So, Matt and I began playing.

As I had also played VI cricket when I was younger, quite a lot of these skills transferred to VI tennis, such as being able to track a bouncing ball and hitting a ball into the air. This gave me a head start as a player.

When I moved to Cambridge in 2015, I joined a VI tennis club. This was the first time that I really focused on training and playing competitively. I began entering regional tournaments and did great. 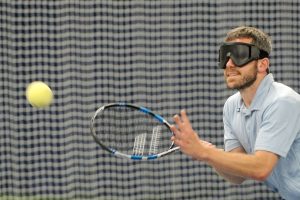 I went on to compete in the National Championships, which I won twice! I would say that my fondest tennis moment so far is winning the second title. The first one was a fantastic achievement, but I then picked up a serious injury which took me out of the game for a while. When I returned, VI tennis as a whole had progressed and the competition was much fiercer so being able to retain this title in such circumstances was incredible!

During lockdown I have been practicing my VI tennis skills with some help from my guide dog Daisy!