The two camps returned to Nottingham Trent University Clifton Campus, it was fantastic to return following 2021! Despite being in the same places, there were distinct differences from 2021 as the two camps were able to mix more as a result of relaxed Covid-19 measures compared to the year prior. Of course, we had to find a way to do this revolved around fun and silliness, as the two camps were mixed into four groups and each group was given a song they had to dance to whenever it started playing! There were some classics like:

This was our 6th camp, and we have been continuing to instil our 6 key values (confidence, honesty, respect, trust, listening, and teamwork). We have had a short break in camps so there was a big emphasis to bring the team back together and reflect on the super busy months they have had whilst having lots of fun, with many undertaking their GCSEs and A-Level studies recently. 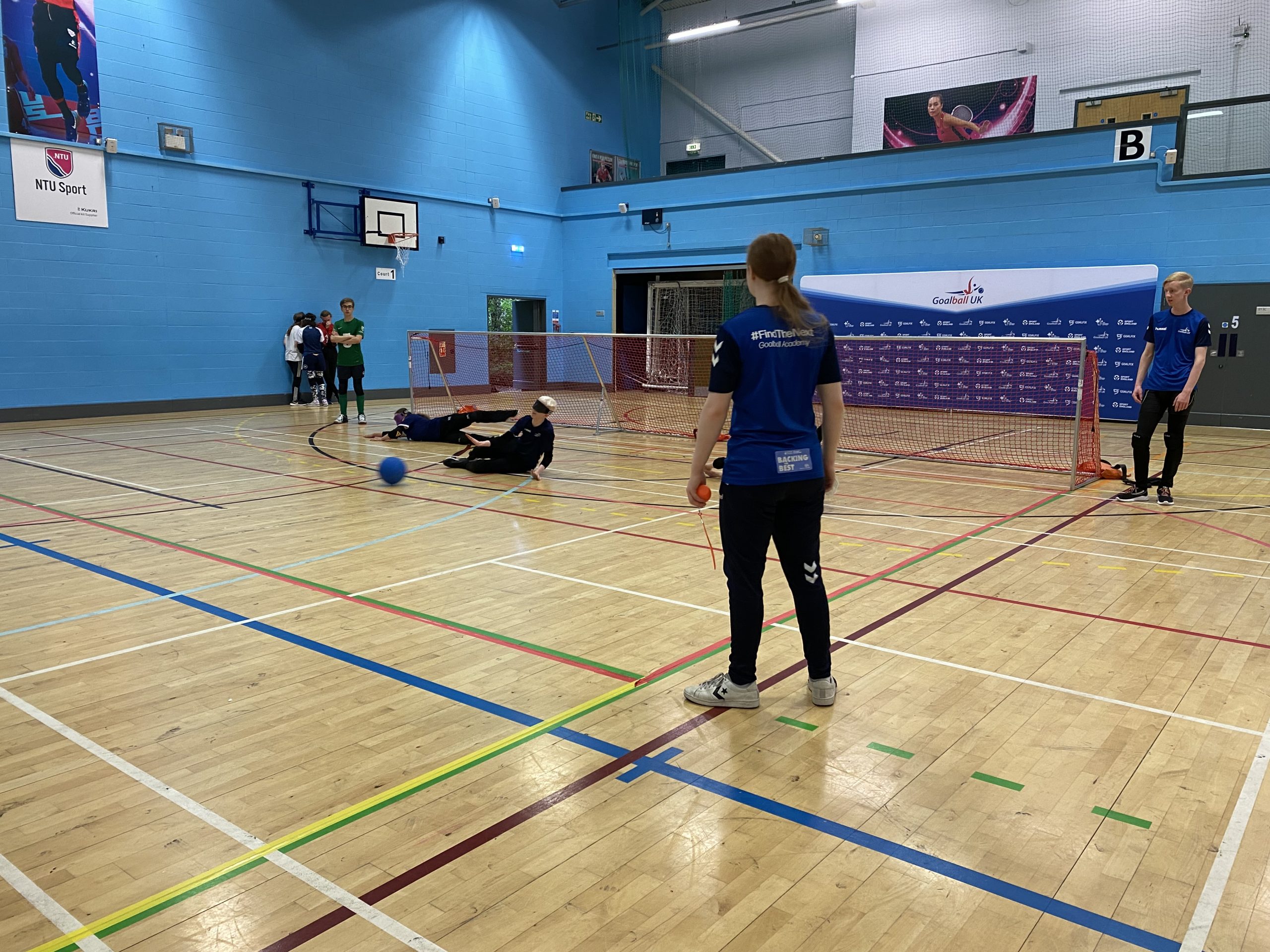 We hosted a mixture of coached on-court where we introduced new shooting techniques for the team to try their hand at, as well as gameplay scenarios, developing their ability to be more deceiving and creative in their play! Meanwhile, off-court, we caught up with one another via reflection sessions and raised awareness on all of the different types of protective equipment you can wear as a goalball player, thanks to Gary & Georgia goalballers!

As well as welcoming the team back together, we welcomed back two of our recent #F T N G A graduates to support us. Chelsea Hudson and Alex Ulysses, both recently represented Great Britain U19s at the European Para Youth Games (E P Y G). They both joined the team as members of staff, going full circle from their time as players with the #F T N G A! Alex joined the team as an Assistant Coach, coaching alongside Tommy Britton, who also represented Great Britain at the E P Y G! Meanwhile Chelsea’s role was as a mentor, supporting staff during off-court sessions with her experience. 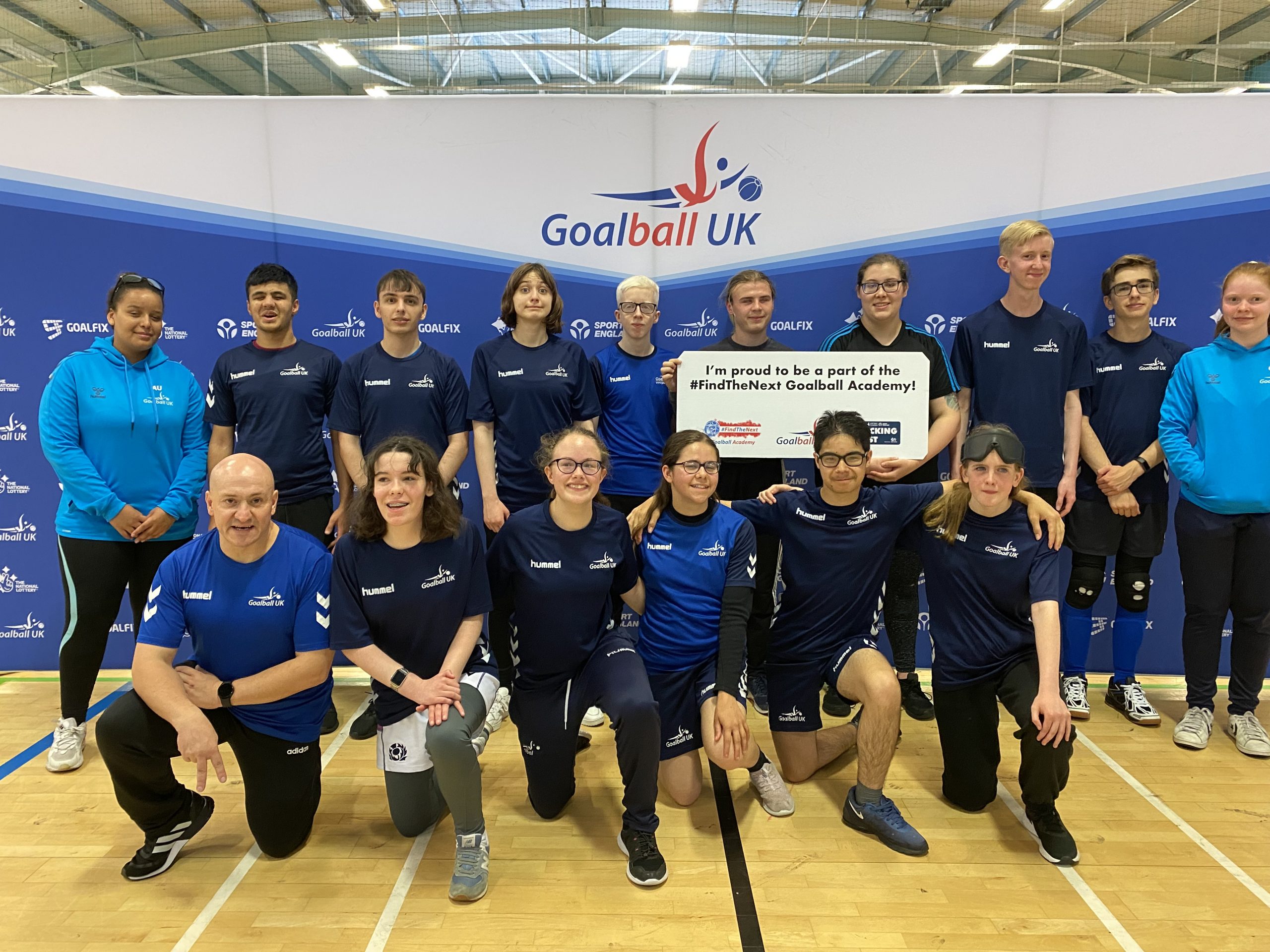 They both did fantastically well transitioning into their roles, and we are looking forward to welcoming them both back to our next camp, with the view to welcome back more of our ‘stupendous six’ of our graduates! As well as supporting the Summer Camp via introductory nutrition workshops, Jodie Redgrave demonstrated her ability to ‘do it all by delivering Anti-Doping workshops to the team to provide an awareness of the importance of clean sport. 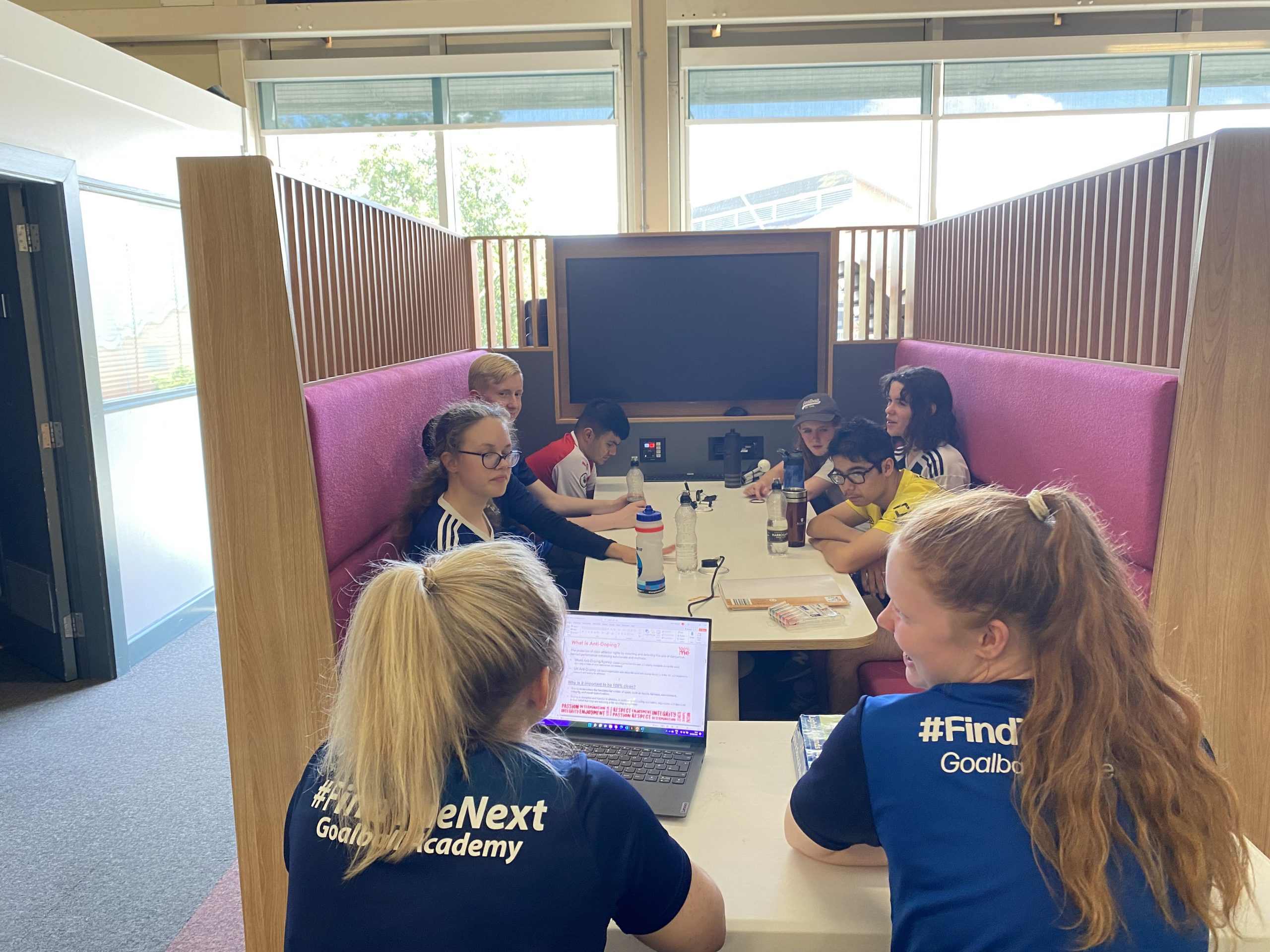 A big thank you to everyone who attended our recent camp, players and staff alike. We hope you had a fantastic time! It could not have been possible without the support of Sports Aid, which has consistently supported the #F T N G A and allowed us to come together as a team to continue our journeys!

Summer Camp – What went on?

Young people from far and wide joined us for Summer Camp 2022, from clubs in the north of England like South Yorkshire and York St John to South Wales, Croysutt Warriors, and Winchester!

As with Summer Camps of years gone by, the main objective is for young people from across the UK to come together, socialise, make new friends, and have an opportunity to develop their on-court goalball skills! Throughout the camp, the young people had plenty of opportunities to develop their goalball skills. This was through a mixture of coached activities and self-led sessions where the young people worked on some of their personal goals, with the assistance of the Summer Camp staff and coaches. 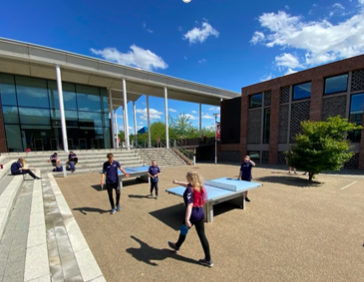 An exciting first at a Goalball UK Summer Camp, the young people had the opportunity to take part in an off-court goalball-related workshop. This was an Introduction to Nutrition with Jodie Redgrave (GB Men’s Nutritionist). This was a great opportunity for the young people to learn about some of the off-court considerations goalball players have, especially if they aspire to progress to a high level in goalball.

Each evening of the camp there were some organised fun and sporting opportunities for the young people to choose from. This included an evening of team-building activities on Monday led by Chelsea Hudson (#F T N G A Graduate & GB Women’s Player) and Sophie Blagg (Goalball UK Workforce Development Officer), which was a fantastic ice breaker on the first evening. 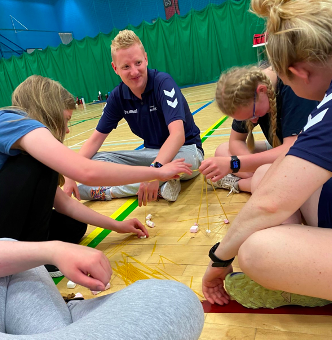 When did we join forces?

The #F T N G A and Summer Camp teams joined forces on Tuesday, as we welcomed Matt & Alex of the Nottingham City Council Adventure Team who led a morning of rock climbing! This was a fantastic opportunity for the young people to try something different and conquer their fears. The young people loved this and were a great chance for the two camps to mix together. 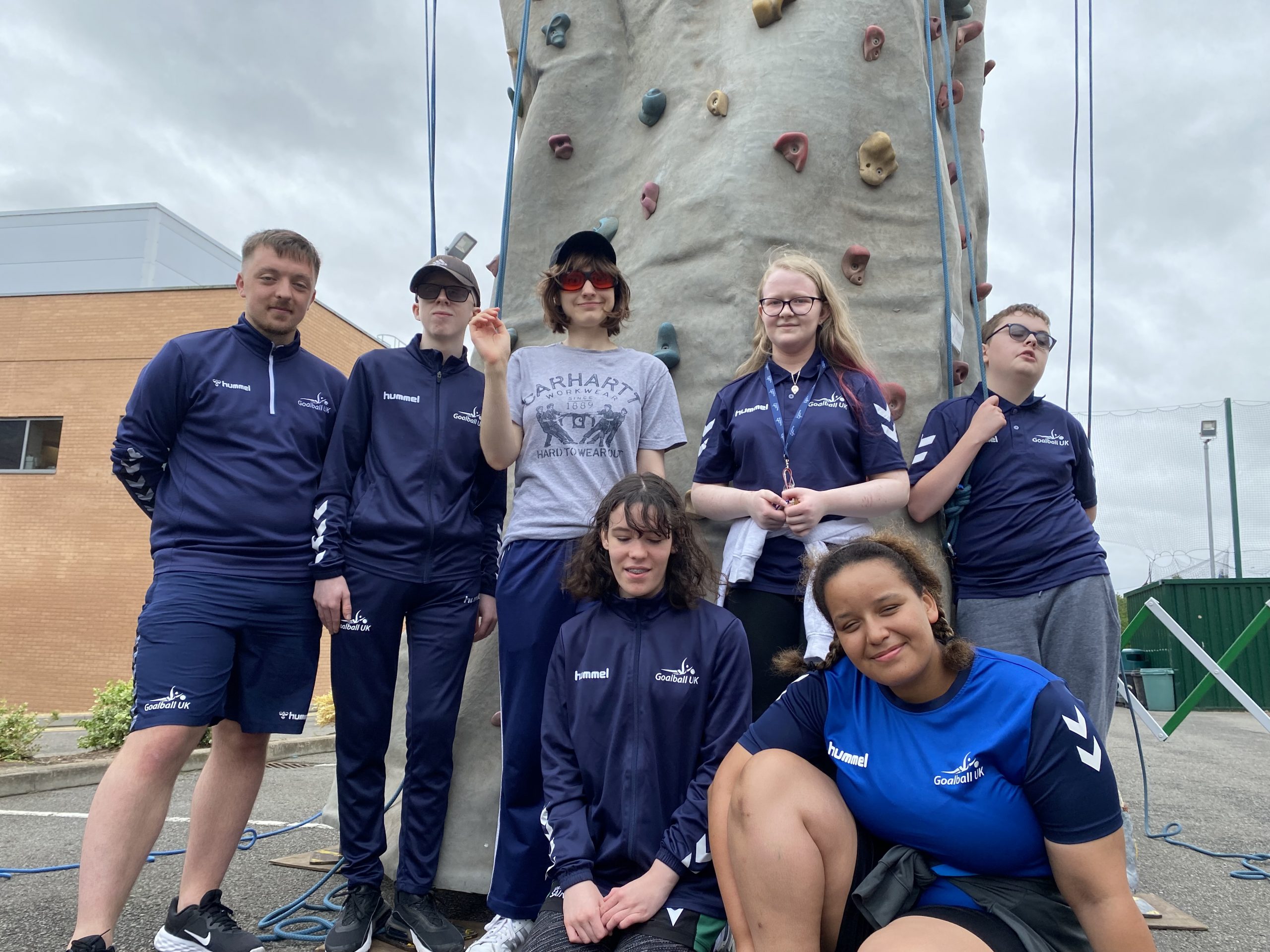 What’s happening for the younger generation of the Goalball Family in the coming months?

Across different projects, there are lots to come that the younger generation of the Goalball Family can be excited for! For the #F T N G A, they have a second camp between Monday 22nd – Wednesday 24th of August which provides a further opportunity to learn and grow together ahead of the 2022/2023 domestic goalball season!

Meanwhile, stay tuned for information on junior days and activities, which provide an opportunity for young people to have their first experience of goalball. And finally, information regarding secondary school resources will be published during the next academic year, which is being developed to instil confidence in teachers and sports coaches to deliver goalball to their people. 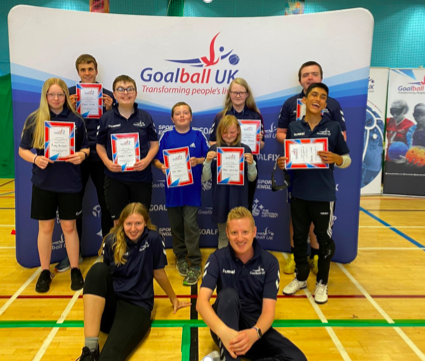 We thought this would be a great way to celebrate #InternationalYouthDay, enjoy your weekend Goalball Family!