Digging through the Goalball UK archives – a look back at 2015

Today, we’re reminiscing on the mammoth effort from the Goalball Family to raise over £12,000 by taking on the Coast to Coast Challenge. 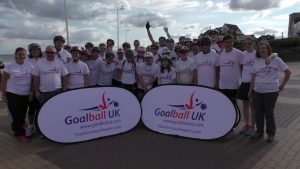 In August 2015, 15 tandem bikes set off from Morecambe, Lancashire to cycle the 170 miles to Bridlington in East Yorkshire. They followed the Way of the Roses, which saw the team cycle across beautiful, varied landscape including the Lune Valley, Yorkshire Dales, Nidderdale and the Yorkshire Wolds.

Day one saw the team biking the 28 miles from Morecambe to the overnight stop at The Dalesbridge Centre, near Austwick. Even though there were a few challenging hills and a slight detour into the centre of Austwick, everyone was in great spirits and thoroughly enjoying the challenge and taking in the spectacular landscapes.

On the second day, the route passed through Settle, which meant the riders had some long and steep hills to climb. Even though everyone found it tough, they gritted their teeth and powered up them in a manner which even Chris Froome would be proud of. Their reward for this was a relaxing and enjoyable ride back down the hills afterwards.

Day three saw the riders take on the 47 miles from Pateley Bridge to York, travelling via Ripon. The ride started with a few steep hills, which pushed our riders to dig deep. From there, the riders could relax and enjoy some brilliant downhill stretches to the first check point at Fountains Abbey. The riders were then treated to a stunning descent through the grounds, which offered views of Ripon cathedral. The group rode onwards through small Yorkshire villages towards the final overnight stop in York.

Following three days and 109 miles, the Coast to Coast team had 61 more miles to go from York to the finish line in Bridlington. The day started with a ride around the racecourse, before heading along the River Ouse to the first check point in Stamford Bridge (the town and not the football stadium).

After lunch, the next stop was Sewerby, one mile from Bridlington, where the riders came together to reflect on their achievement before the ‘victory lap’ into Bridlington. Travelling in convoy along the promenade, the riders were met at the finish line by the support team with the Queen anthem ‘We are the Champions’ blasting from the speakers. The riders passed over the finish line with some punching the air or with arms raised in the air in celebration. 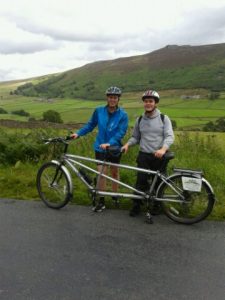 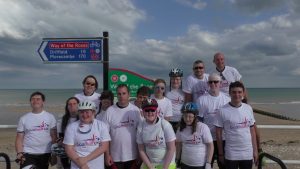